Revised PUD for The View at Waterfront 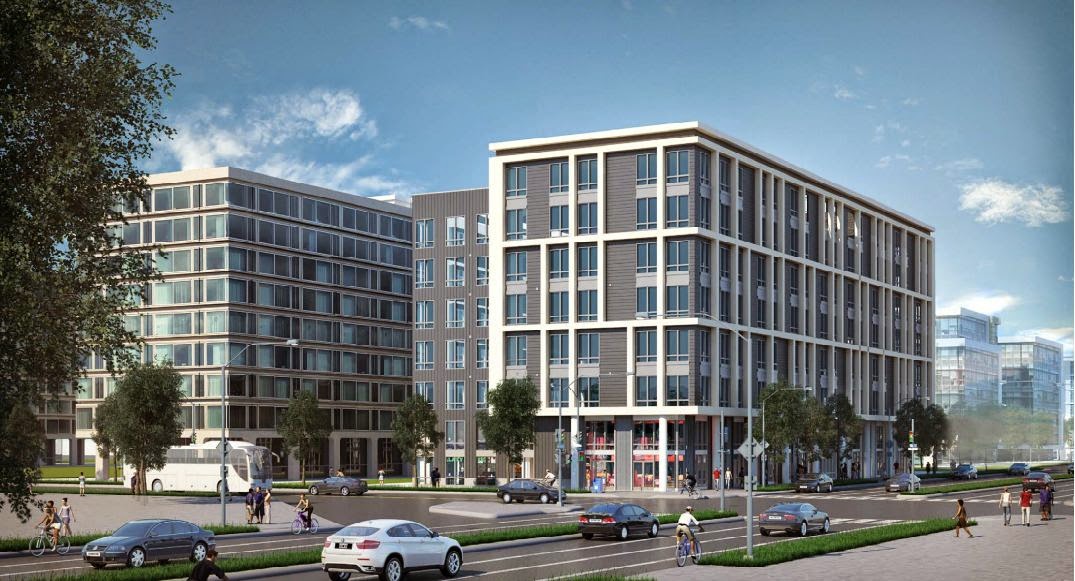 Back in late December, Mill Creek Residential Trust, the new owner of The View at Waterfront apartments at 6th and M streets, submitted a revised Planned Unit Development (PUD) application for construction of two new residential buildings on the parking lots fronting M and K streets. A PUD was approved several years ago when Fairfield Residential owned the property, but several changes have been made since then. Generally, Mill Creek has reduced the scope of the project. In the previously approved PUD, a total of 324 new units were planned, but the proposed changes reduce the number to about 260 units. Additionally, the height has been reduced from 112 feet to 85 feet. The Floor Area Ratio (FAR) has been reduced to 3.4 from 4.39 and the lot occupancy is proposed to be 42% compared to the previously approved 51%. Parking has been reduced significantly from 569 total spaces for all four buildings to 290 spaces in three levels of below-grade parking; however only 175 spaces are required under zoning.

The look of the proposed buildings has also changed since Fairfield retained Esocoff & Associates to design the previously-approved project. SK&I Architecture has designed the new buildings with a grey and white color palette that resembles neighboring Lex at Waterfront Station. The PUD application describes the design of the new buildings:

Each new building is comprised of two volumes. The first is a taller, lighter box that is supported by a tall recessed ground floor with exposed columns along the primary streets and corners; the second is a more subdued, lower mass that meets the ground plane and also is pulled back and tapered from the corners between the proposed and existing buildings along the street edge.

The north tower will have seven stories, including a mezzanine on the top floor and the south tower will have six stories, including mezzanines on the ground and top floors. A two-story retail space is still planned for the new south tower at the corner of 6th and M streets facing Arena Stage, but has been reduced from 8,900 SF to 5,200 SF. One thing that hasn’t changed is the amount of space set aside for affordable units. There will still be 6,500 SF of affordable housing evenly distributed on floors 2-5 of both new buildings, in addition to the 9,500 SF of affordable housing that currently exists in the I.M. Pei buildings.

The developers will go before ANC 6D later this year to seek their support before meeting with the Zoning Commission. If approved, Mill Creek would like to start construction in 2016.

Renderings courtesy of SK&I Architecture, Esocoff & Associates, and Land Design
Posted by SWill at 1:45 AM

Very glad to see this moving forward. The dark parking lot in front of Arena Stage will soon be history!

It's interesting that they're building a high-rise rather than a 6-story stick building, which is what Mill Creek usually does (see Trilogy Noma). I suspect that the ultimate design came down to how much underground parking they could build; it's disappointing that housing people comes second to housing cars.

Some creative code interpretation would be required to get a stick building up to 85' -- like calling the 2nd and 8th floors "mezzanines." Seattle has a specific code exemption that allows two-story concrete podiums with the usual 5.5 stick floors above. Perhaps a 2015 code update has changed matters here, though.

That is some of the most boring architecture I've seen in awhile. Even by DC standards. I suppose something is better than nothing, but that building looks like a really cheap version of the ones already there.