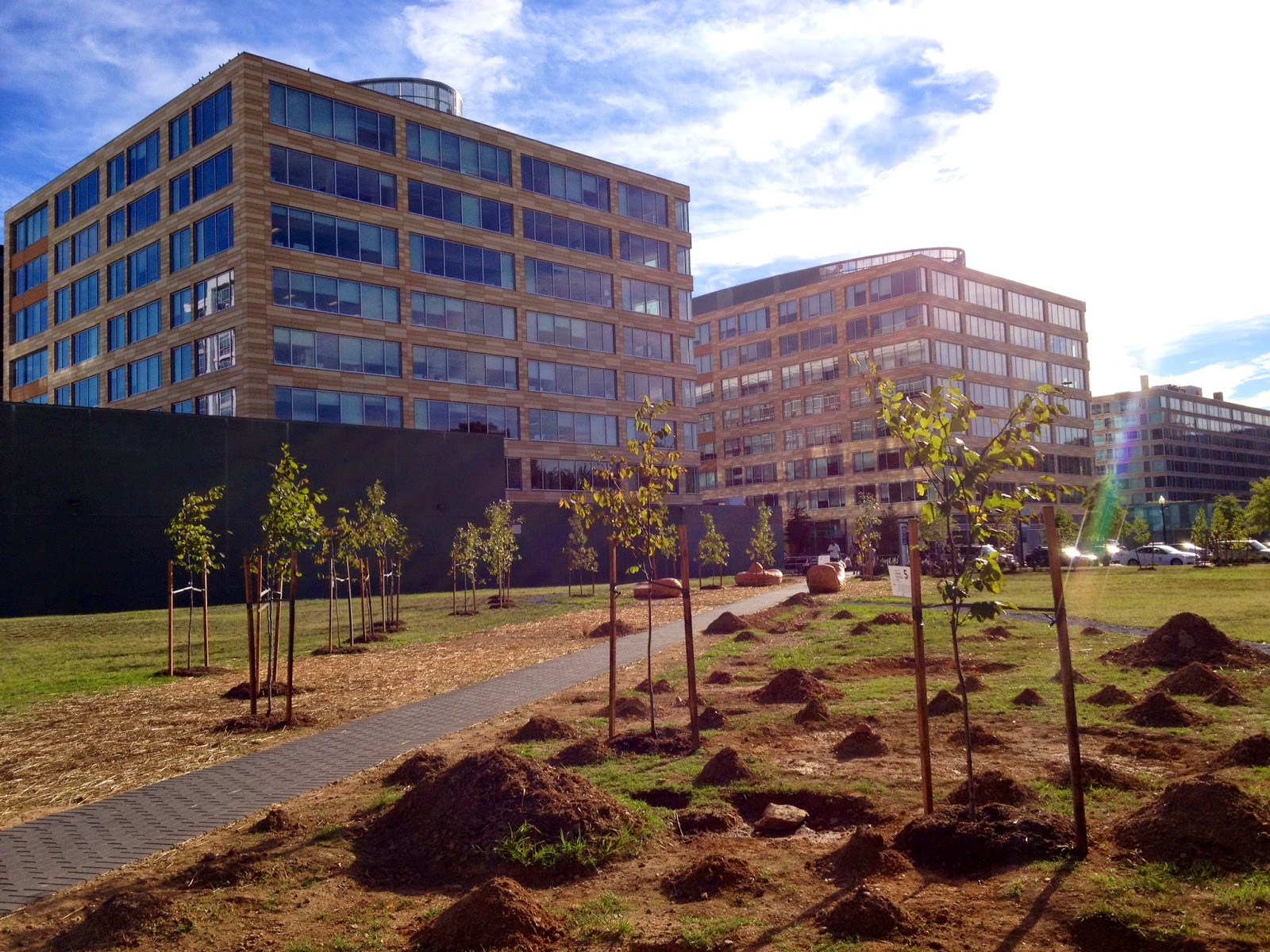 The empty, District-owned lot north of CVS at Waterfront Station has been transformed into 'Nonuments Park', which made its debut in Southwest earlier this month. 'Nonuments Park' was designed by artist Lance M. Fung and is one of the components of The 5x5 Project, a city-wide endeavor displaying temporary art installations. The following photos show the different components of 'Nonuments Park.' The placement of 33 trees in a "sinuous line" by Peter Hutchinson (see above photo) separate the different artist installations on the site while the mounds of dirt concept by Eliza Naranjo Morse and Nora Naranjo Morse will change daily over the course of a month - people will dress up in costumes representing different aspects of American culture while digging, which "empowers each of us to face personal and social challenges." 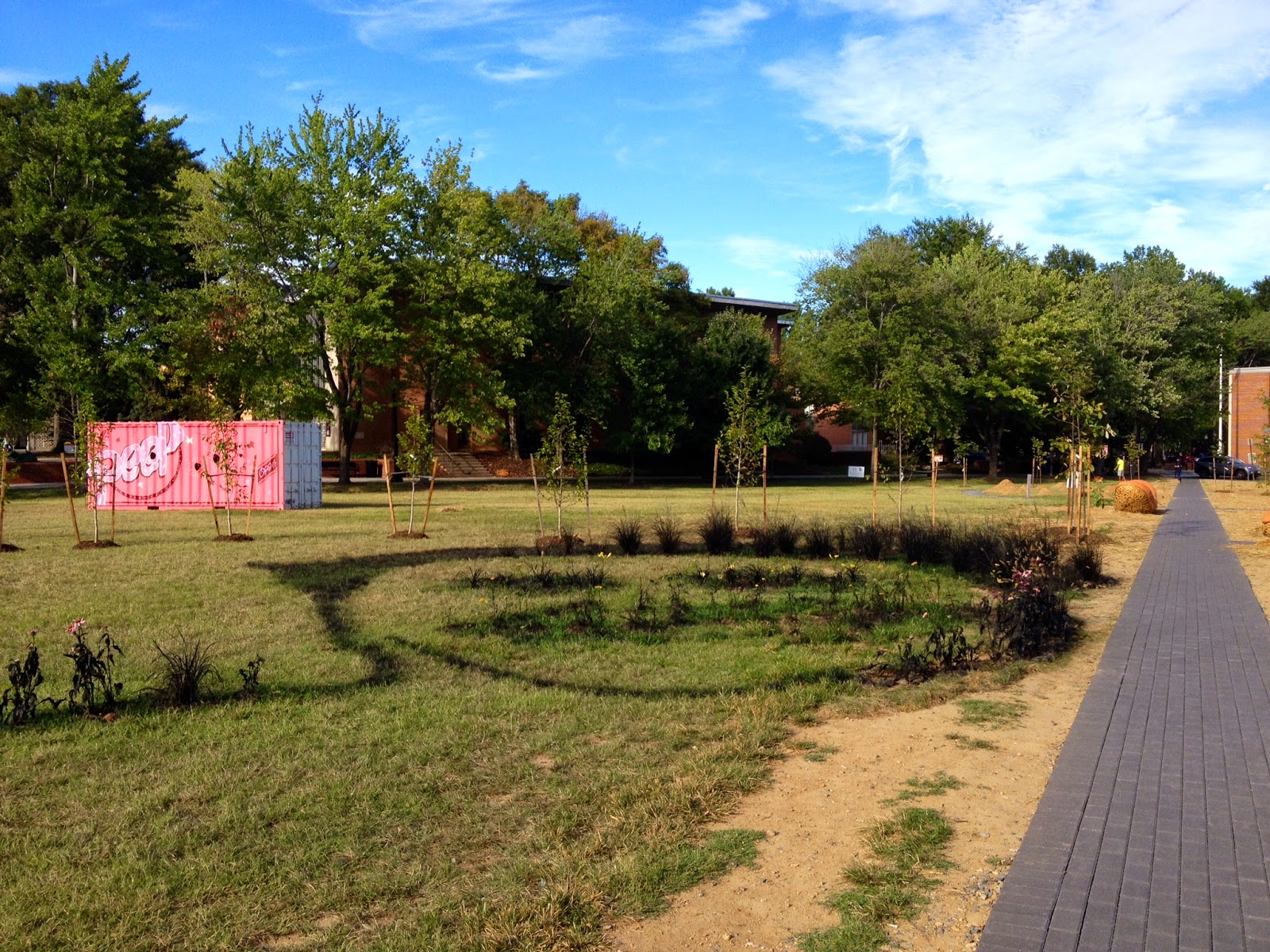 Another section of the park features a sculpture garden in the likeness of Southwest resident Alpha Lillstrom, designed by Jennifer Wen Ma. According to The 5 x 5 Project webpage on Nonuments Park, "community member Alpha Lillstrom was chosen by lottery for the portrait, paying homage to a citizen whose deeds are not necessarily grand in the scheme of human history, but whose challenges are still heroic in the arduous struggles of daily life." 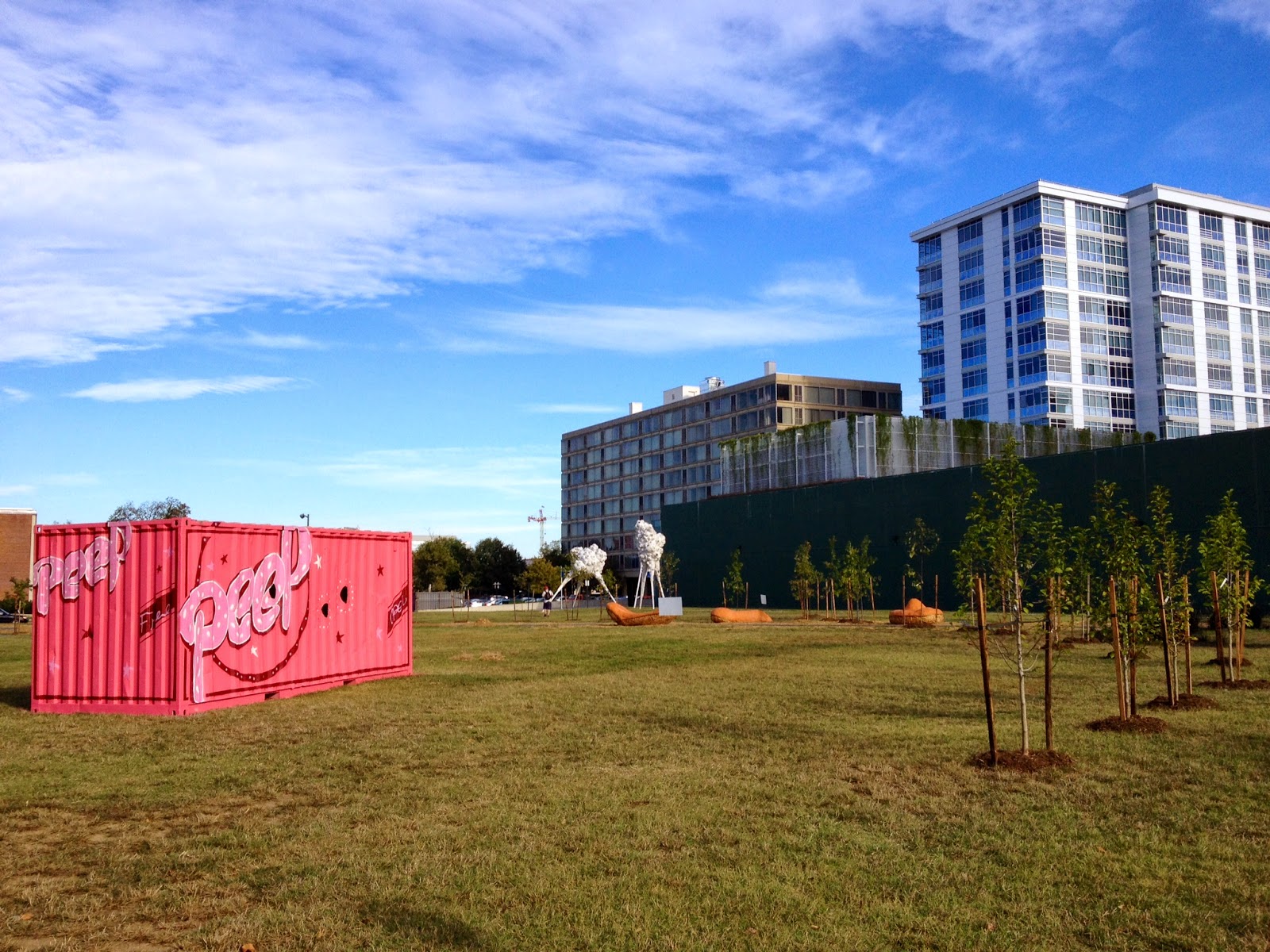 The pink shipping container with the word "Peep" spray painted on it was designed by Jonathan Fung and has holes cut into it. A look inside reveals photos of children - victims of human trafficing from around the world as well a sewing machines, since many of these children are forced to work in sweatshops. 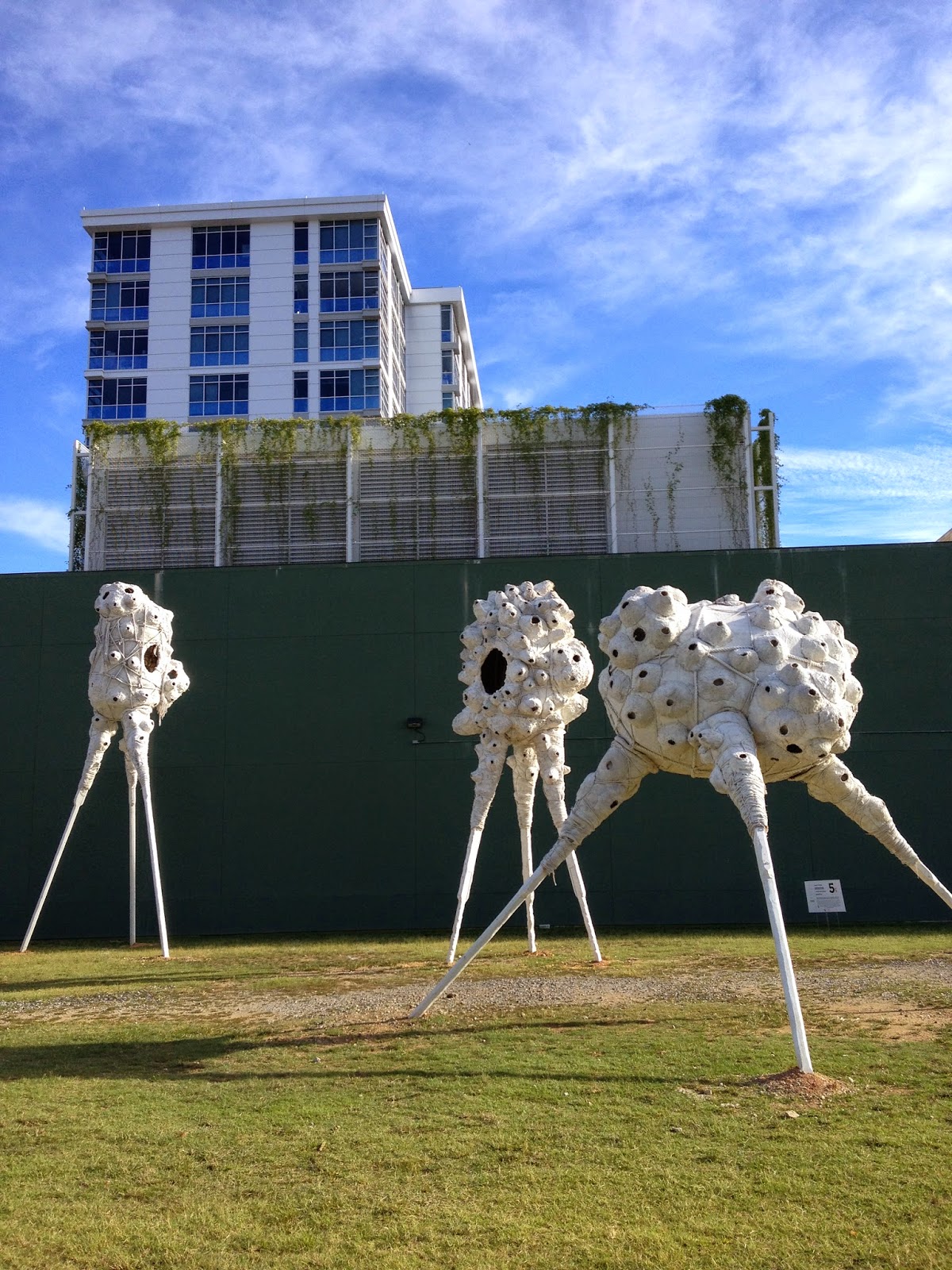 The tall white structures are called "Migration", which is meant to represent "a home threatened, yet resilient in the face of displacement and climate change." The nests designed by Cameron  Hockenson also represent neighborhoods in Washington DC that are changing due to gentrification. 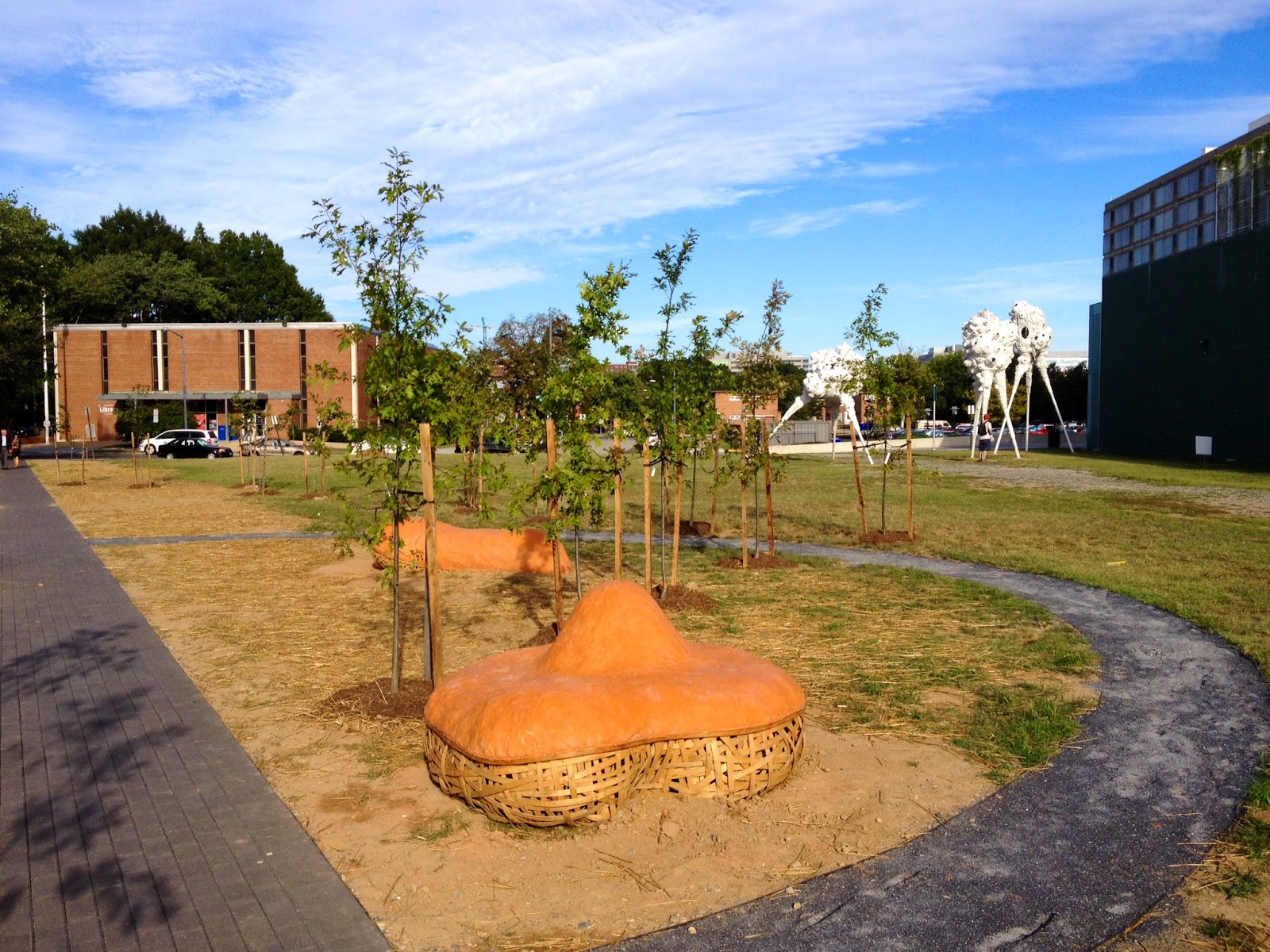 Scattered throughout the park are monumental seating areas that are the product of the "Mud Dance" that occurred last month, which were designed by Michael Koliner.
Posted by SWill at 12:14 AM