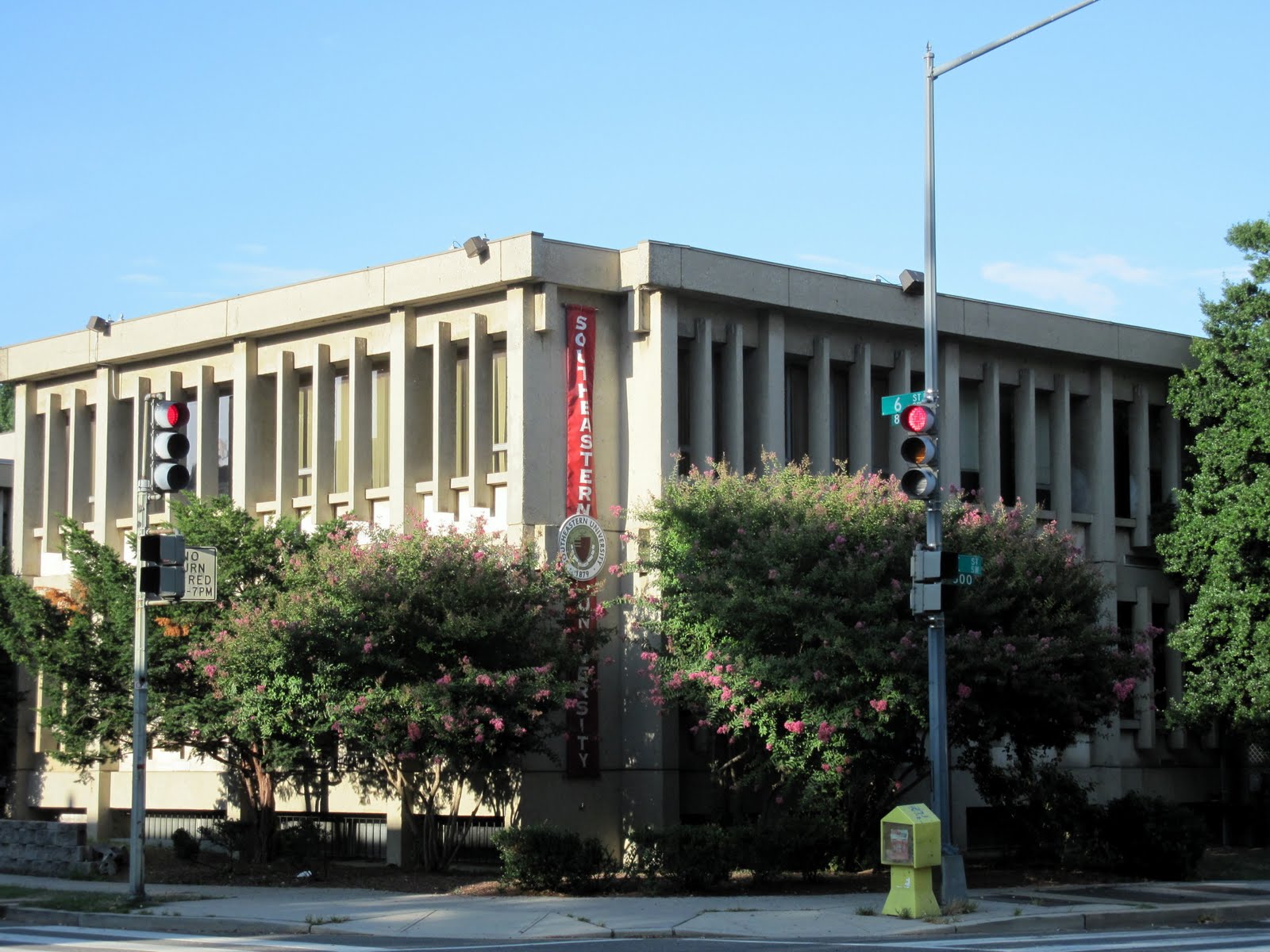 Apparently spurred by the raze permit that was applied for the former Southeastern University campus building at 501 I Street a couple months ago, SWNA filed a historic landmark application for the property. According to the landmark application, the building was first constructed in 1948 for the Metropolitan Police Boys Club No. 4 with a brick exterior in a smaller footprint than its current state. The building was one of the few that survived urban renewal. Then in 1961, The Hawthorne School (a private co-ed high school) purchased the building, expanded it to the north & south, and clad it in concrete in a brutalist design done by Charles Goodman, the same architect that designed River Park Cooperative Homes. Eventually, declining enrollment and financial difficulties at the school caused the sale of the property to Southeastern University, which operated at the site until 2009.

Currently, the campus is owned by Graduate School USA and is vacant. The campus is under contract to the Shakespeare Theatre Company (STC) who has plans to joint venture with developer Erkiletian and build actor and apprentice housing, along with rehearsal and performance space, costume and set equipment storage, education classrooms, and the administrative headquarters for the Company. A zoning change would be needed for the property in order to build what STC has initially planned, a nine-story building with approximately 155 residential units and 70 garage spaces. A historic landmark designation for the property would most likely alter or scuttle STC’s plans.

SWNA will be hosting a neighborhood forum on 501 I Street this Monday, July 28 at Arena Stage, starting at 7pm.
Posted by SWill at 8:11 AM

I'm not sure what the SWNA argument is, but the proposal from the Shakespeare Theater Company sounds good to me and the building is ugly. Sometimes new development is good.

Just because a building is old or survived urban renewal is not a reason to propose historical status.
This building has proved unusable for several potential purchasers so it is time to move on and move into the 21st century. The row houses have very little ground to complain when there is a popup that is 4 stories tall next to this property. 501 I street was unzoned until 1995 so the zoning issue is basically moot.

"Just because a building is old or survived urban renewal is not a reason to propose historical status."

Agree 100%. I don't see how it is good for the neighborhood in any way to keep a "historic" building sitting empty rather than having new development that makes use of the space. If there is some additional argument from the SWNA, I'd like to know what it is.

I'm curious to know what that building looked like before they clad it in concrete. Perhaps the STC can incorporate the original facade into their design? That said, if this designation would prevent STC, or any other interested party, from developing that site, I have to echo these other comments. Raze that sucker and put something usable there. That corner has been blighted for far too long.

Raze it! Less ugly than the Brutalist stuff, but also less practically built for any tenant that's expressed interest so far.

Longtime blog lurker/first-time poster joining the chorus. I'm struggling to understand SWNA's actual reasoning for preserving this urban blight rather than supporting the positive development and actual use of the site.

In general, I also fail to understand the consistent kneejerk demands to preserve every single repulsive block of concrete throughout SW, but maybe that's just me.

This is awful, and a blatant example of a small group of residents using historical designation as a tool to thwart development.

SWNA is advocating smart development, rather than any old development on this site! A 9 story building at 6th and I -- I wouldn't want that next to my home!!

Goodman's building is a tough, unassuming masterpiece. It's exterior is strong, noble, and harmonious, recalling the pillars of the Acropolis. It's tough to see this through the years of neglect, but it's all there.

I'd like to see adaptive reuse myself -- Goodman is a SW treasure (see River Park!)!

Most of all, any development of the site should be guided by a gutsy, wise architectural vision the will stand the test of time -- we should not tolerate the bland and utterly mediocre buildings that have been thrown up willy nilly by the Stadium. We don't want SW to look like K street or Rosslyn. Preserve architectural greatness and SW's beautiful open spaces!

I moved to SW 6 years ago. I've grown to love its modern architecture and adore the open spaces which the city and developers seem to want for profit and tax revenue. While I want to see development and more amenities in SW -- the Indian restaurant which just opened is very much worth our $ and support -- I would like to see development consistent with the character of the neighborhood, one which utilizes buildings with different heights to maintain the feeling of openness. Not just a solid canyon of bland "contemporary" buildings like you'd see in other overdeveloped parts of the city (I'm looking at you, Columbia Heights). I don't live near the SEU school, but I imagine the neighbors would not like to have a looming building throwing their homes into shadow.

A beautiful example of wise development may be found, in my estimation, in the brilliant updating of Arena Stage. I would hope that Shakespeare could follow the lead of Arena Stage rather than thwart the extraordinary mid-century buildings that SW is blessed to call its own.

With so much junky, faddish architecture next door to us at the Yards, I'm grateful for SWNA's efforts.

If you want to challenge STC to make a beautiful design, fine. But don't shoot yourself in the foot. We could end up up with much worse neighbors than STC , and I don't believe any replacement building is going to be much worsely used than the old SEU building, whose library I used to frequent, would be. So, I think it's likely to only go up from here. The fact is, maybe some SWNA members think the old building is worth preservation, but to the extent that this blog represents the views of SW overall, it's worth noting that you're in the minority.

SWNA is out of touch with where SW is headed. It seems they are OK with the current n'hood and don't want to see it changed much. SW does have a neighborhood feeling to it, and as more new buildings and faces come around - the less and less some n' hood orgs will feel a part of it all. And maybe it's a generational thing, an age old battle that can't be won. Who knows? Kudos to them though for organizing and having a voice, but that attitude will hold us back as other n' hoods around us (i.e. the Navy Yard) soar with progressive, and sustainable n'hood planning.

Luckily, SWNA is JUST a n'hood group and I have talked to multiple DC gov organizations that don't plan on letting them get TOO much in the way. It's important however that some of SW's younger residents get actively involved. Attend the public meetings. Speak up! They are a small sample of SW that are starting to speak for fewer and fewer of the n'hoods new residents, yet they are helping shape the future development.

With that being said, I bought into SW for all the same reasons they did (quiet, convenient, green, etc.), yet I DO want to see SW change - for the better obviously.

At it's current density that building could do very little for our n'hood. Not to mention the design alone is horribly inefficient. And lets face it - the building is ugly. Always will be. I'm not saying building a sky scrapper next to the houses on 6th St. is the answer. A green, medium density building actually seems more appropriate, but preserving THIS buildings. LOL. Come on SWNA.. We need you to do better.

Many of you have been solicited to attend the public meeting at Arena Stage on Monday, July 28, at 7:00pm to discuss the future of the former Southeastern University site at 501 I Street, S.W. Our supporters have been contacting us to gauge our views on how a redevelopment of the site might impact the park.

It is our view that the Shakespeare Theatre Company (STC) would be a good neighbor on our northern perimeter. STC's community outreach in Capitol Hill, and elsewhere, shows a track record of good corporate citizenship. With an ownership stake in the neighborhood, they will also share our interest that the park, literally on their front doorstep, reaches it's full potential as a village square welcoming neighbors, nearby office workers, and visitors alike.

We also believe that a mixed use commercial/residential facility of some type and size is in the best interest of the park due to the pedestrian traffic that would result---especially from the STC's theatre classes Monday-Thursday which would see up to 100 students transiting the park twice each evening. Also helpful, we believe, will be the 24/7 eyes-on-the-street to enhance security both in the park and Amidon-Bowen's playground.

That being said, the concerns of our neighbors on Sixth Street, S.W., must be addressed. Ironically, many of those who will be most impacted by development are among our most loyal supporters and most generous donors. With them, and our sponsor the D.C. Department of Parks and Recreation, we look forward to working through our ANC Commissioner Sam Marrero in the PUD process for ANC 6D's ultimate recommendation to the Zoning Commission.

We hope this position statement is helpful, and we appreciate our input being requested.

By consolidating the Shakespeare Theatre's office and administrative functions, this will also open up new retail opportunities along Barrack's Row. This is another reason to support this redevelopment.

With housing becoming unaffordable to many people in Washington, we need more opportunities for additional housing located near metro stations. Blocking this with attempts to designate this as a historical landmark should be opposed.

I support smart development in Southwest and SWNA's efforts to make sure that happens. While the Shakespeare Theatre would be a great neighbor to have, I don't want them if I have to live next to a building that dwarfs my townhouse and those of my neighbors. Adaptive re-use of the existing building makes the most sense to me.

SWag, well said as usual. I don't know you, but I'm becoming a fan from reading your sensible, balanced comments on this blog.

I'll just add that I saw this coming. The minute I saw that they had applied for a raze permit, my sense of elation and hope for something far better on that site was immediately dulled by a feeling of dread, knowing that someone would likely object and fight to designate this hideous, out-dated, inefficient, under-utilized building as deserving of historic status. Choose your battles, people. This one isn't worth saving. That doesn't mean a 9-story mini high-rise (would that be a medium-rise?) is the best option bordering the existing townhomes. But let's not totally stand in the way of progress for our neighborhood.