The Little Quadrant That Could Turns Six!

I’ve been so swamped lately I almost didn’t get a chance to acknowledge that today is SWTLQTC’s sixth anniversary! Here is a quick note related to my very first blog post on Wednesday, June 4, 2008…a tower crane recently was delivered to the 400 E Street mixed use project site. The DC government released a RFP in 2008 for two parcels it owned just north of the freeway. After several years of delay, construction began in late 2013 on the first phase of development at 400 E Street. In 2015, a new Hyatt Place hotel, Engine 13 firehouse, a new headquarters for KidPower, and ground floor retail will be located there, which is being developed by E Street Development Group. The second phase at 6th and E streets will be developed at some point as an office building after 400 E Street is completed and Engine 13 vacates their current location for their new home. A webcam has been set up of the construction site. 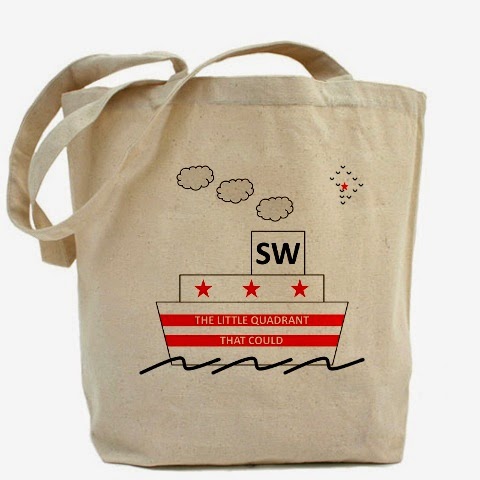 Be on the lookout soon for SWTLQTC tote bags that will be available for sale with the blog’s new(ish) logo. Proceeds in 2014 will benefit the CBCC, a local non-profit organization that’s working on several initiatives in the neighborhood including education, housing, work force, and community enrichment. It’s been a pleasure to do this blog for the past six years and highlight what makes The Little Quadrant That Could a unique neighborhood in the District…including the good, the bad, and the ugly.  The next six years should be very interesting...

Thanks for all your support!
Posted by SWill at 5:20 PM

Happy 6th birthday and thanks for all you do!

we appreciate your work over the years -- and i'm definitely getting that bag.

Thanks for keeping us all informed.