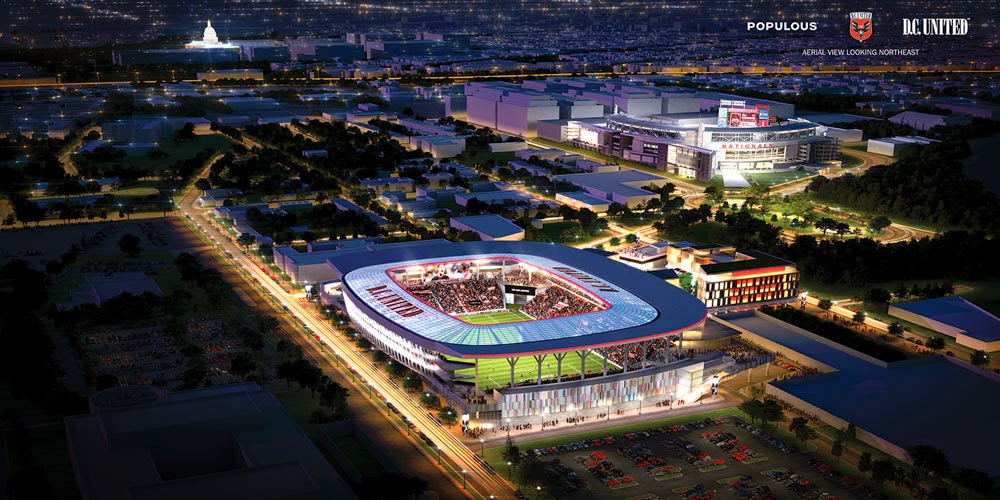 Coinciding with the start of the World Cup in Brazil and ahead of the first DC Council hearing on the soccer stadium deal later this month, DC United has released new renderings of the planned $300 million stadium at 2nd and R streets in Buzzard Point, which has been designed by Populous (formerly HOK Sport). Populous also designed Nationals Park down the street and FedEx Field, in addition to Sporting Park for the MLS team in Kansas City. The Buzzard Point stadium will seat 20-25,000 fans and will host MLS matches; international friendlies; high school & college lacrosse, football, and rugby; concerts; cultural events; meetings; and banquets. Check out some of the renderings below (courtesy of DC United):

As currently designed, the length of the stadium’s pitch will run along 2nd Street from R to T streets and the width will cover approximately one block from 2nd to 1st streets. Potomac Avenue will end in a traffic circle at 1st Street and will turn into R Street for one block until it terminates at 2nd Street. The portion of R Street that currently exists from Potomac Avenue to Half Street will disappear and become part of a large plaza that will front the stadium. A group of small buildings will line most of Half Street except for the northern-most section that will be part of the plaza. (see below rendering) The southeastern corner of the stadium footprint at Half and T streets will still contain Pepco’s outdoor substation, so some screening will need to be done to cover that up until a new substation building is constructed at 1st and Q streets. Power is no longer generated at the Buzzard Point Power Plant, which is located at Half and V streets.

The first DC Council hearing will take place at the Wilson Building downtown on June 26, starting at 9:30am.
Posted by SWill at 3:41 PM