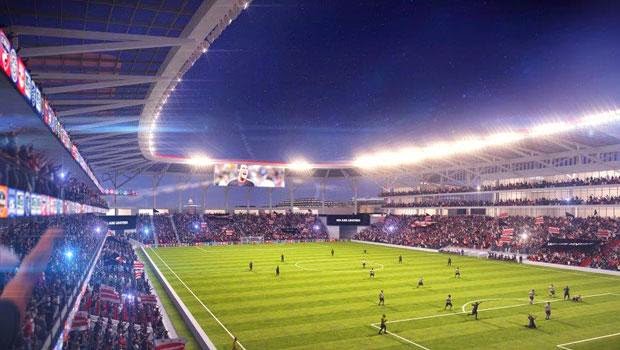 Eighty percent of respondents to Southwest...The Little Quadrant That Could's unscientific stadium poll support the current plan to build a new DC United soccer stadium in Buzzard Point. These results are much different than a poll conducted by The Washington Post back in January where 59% of respondents were against using city funds to help build a stadium. 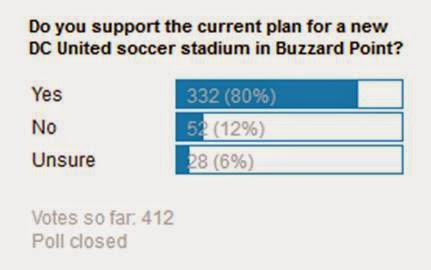 The city and DC United signed a term sheet last July in which the government would spend up to $150 million to assemble land and make infrastructure improvements while the team would spend $150 million to build the stadium. However, deadlines have slipped and the defeat of Mayor Gray in last month's Democratic Primary has placed some doubt on whether the deal will move forward as planned.  For instance, the term sheet states the DC Council was supposed to approve the deal by the beginning of January, but the Council has yet to vote on the proposal or even receive all the details of the deal.

The Winning Goal Coalition, which includes the CBCC, SWNA, and other local organizations, is developing a Community Benefits Agreement for the stadium deal, to ensure that District residents (especially those closest to the stadium site) benefit from the construction of the stadium.

Rendering courtesy of Gensler
Posted by SWill at 12:01 AM

I'm starting to doubt whether this stadium will ever get built. Every organization needs to get their two cents in, and it's near impossible for the numerous community organizations to all come to agreement. If it does get built, it'll likely be delayed several years like the Wharf.

Sounds like the two polls can't be taken as changing opinions on the same question.
The first one, it appears, stressed the use of city funds to build the stadium, while the second vaguely refers to "current plans" without reminding the respondent of the city contribution. As a SW resident, my own position is, sure build the thing here, it would probably do the neighborhood good, but generally I don't think cities should be using tax money to build stadiums.

It certainly makes sense for the city and the local community to make sure that they are not over-burdened by any new stadium deal. However, it would be extremely short-sighted of our local politicians/government leaders to fail to negotiate a solid deal to allow the stadium go forward. One only needs to look at the astonishing positive transformation of the neighborhoods around the Verizon Center and Nationals Ballpark to see the inevitable good that comes from supporting a local professional sports and entertainment venue. I seriously doubt that either of those neighborhoods would have experienced the significant, comprehensive improvement in quality and safety that they did without the stadium/entertainment venues to anchor the area, and the same is probably true for Buzzard Point. I really hope the soccer stadium happens -- and does so at faster than the usual glacial pace of such things.