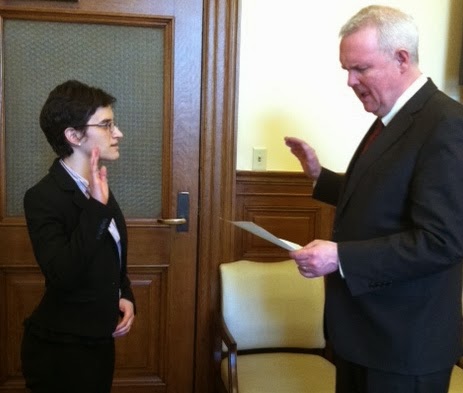 Southwest resident Stacy Cloyd will serve the remainder of former ANC Commissioner Ed Kaminski’s term as the representative from single member district 6D-02, which is the only single member district that spans both sides of South Capitol Street. There were two candidates that had signed petitions in order to run for the vacant seat, but Cloyd was the only one whose petitions were validated by the Board of Elections. Cloyd was sworn in yesterday by Ward 6 Council member Tommy Wells at his office in the Wilson Building. She joins Sam Marrerro and Rachel Reilly Carroll who have recently joined ANC 6D representing 6D-01 and 6D-03, respectively. The next ANC 6D meeting will be on Monday, March 10 at 7pm. The agenda has not been released yet.

Photo courtesy of Linda O'Brien
Posted by SWill at 6:17 PM

Welcome, Stacy, and thanks in advance for your contribution to the Southwest community.