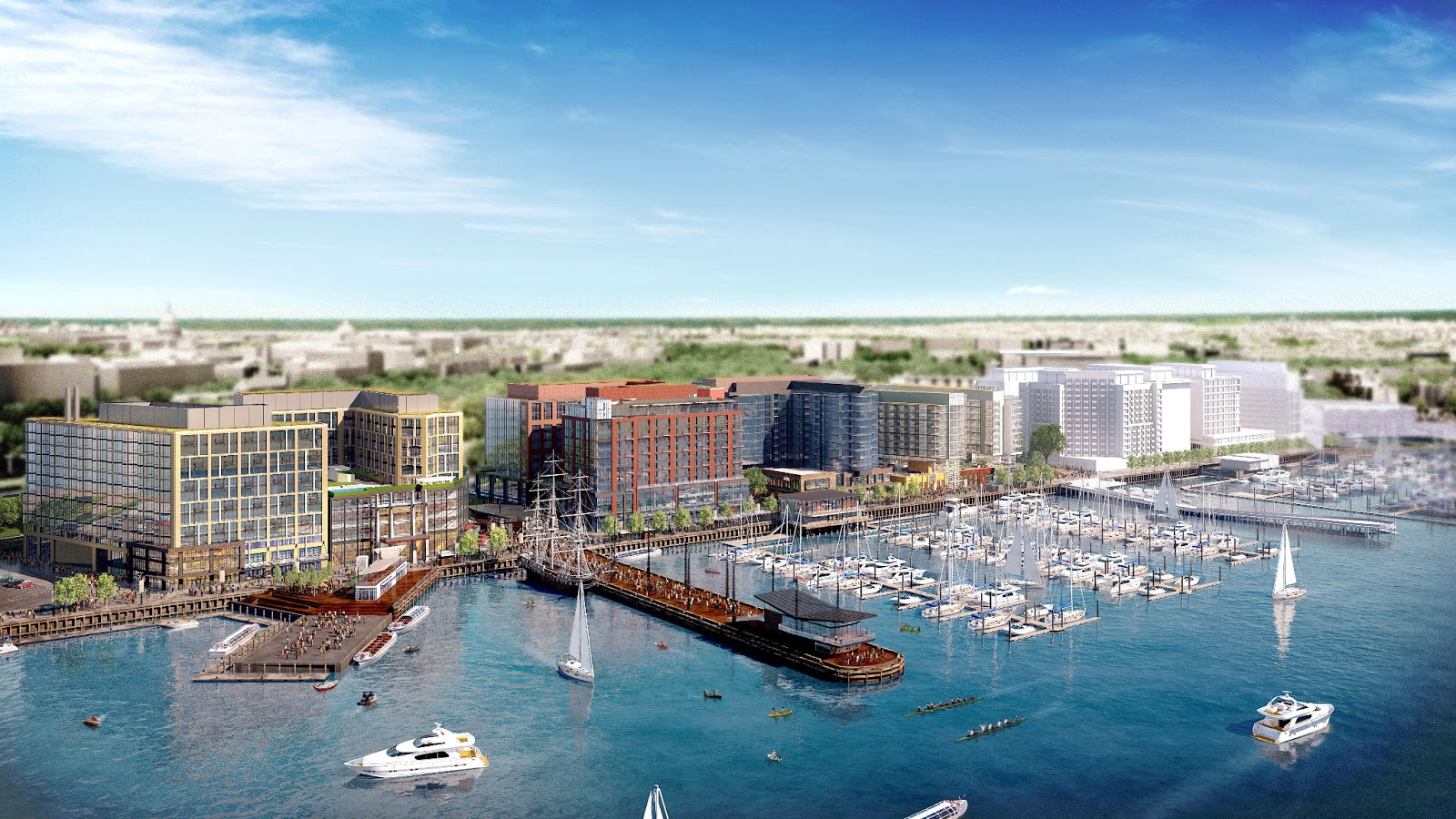 It was announced at this evening's ANC 6D meeting by Hoffman-Madison Waterfront that they intend to hold a groundbreaking ceremony sometime in late March for phase one of The Wharf. Phase one includes parcels 2, 3, 4, 5, 11, and the waterfront park, which goes from west of 9th Street  to 7th Street and then skips to St. Augustine's at 6th and Maine avenues. More information about phase one can be found here. Waterfront establishments including Phillips Flagship and the Channel Inn have been given official notice that they must close by May 10th. The Channel Inn will become the construction office for the builders and the Capital Yacht Club will be moving its operations there until their new building is completed. Jenny's Asian Fusion may also reopen in a smaller space at the Channel Inn. Phillips Flagship will not be relocated to the Channel Inn, but has signed a lease in the neighborhood (presumably at L'Enfant Plaza since it was reported back in July that it was one of the restaurants that may open at phase two of the retail redevelopment). Cantina Marina and the Fish Market will remain open through construction of phase one, although the land side of the fish market will be cleaned up (above-ground utility poles will be relocated, etc.). 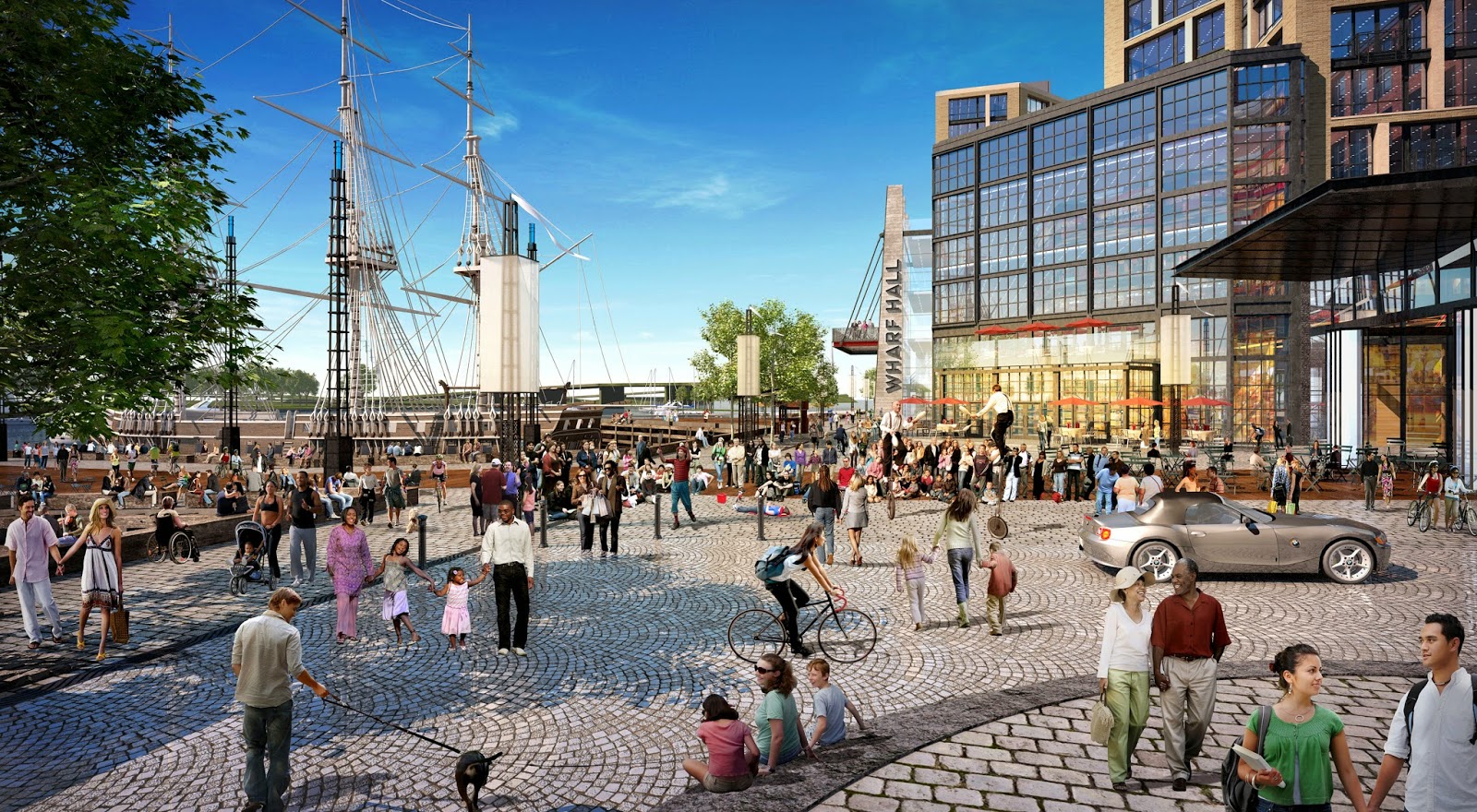 An eight-foot fence and signage will arrive at the waterfront over the next couple of weeks. The construction process of phase one will last approximately 42 months with completion expected in late 2017. One of the first things to happen on the site will be the construction of a 50-space parking lot for the Maine Avenue Fish Market, followed by lane closures along portions of Maine Avenue to allow the relocation of utilities from Water Street and the construction of a new northbound turn lane to the fish market. At the same time, the piers at Gangplank Marina will be dismantled. During this summer, more utility work will be done on Maine Avenue, Phillips Flagship will be demolished, and bulkhead demolition will occur. By the end of 2014, all utilities will be moved to Maine Avenue and excavation will begin on the site. Vertical construction will be done by the middle of 2016 with facade work and interiors completed by the fall of 2017.

Information about the construction schedule, including street closures, a FAQ, and other details will be posted on the project's website within the next 48 hours.

Renderings courtesy of Hoffman-Madison Waterfront
Posted by SWill at 10:13 PM

Huzzah! Can't wait to watch it go up. Maybe some retailers will be more interested in Waterfront Station in the meantime?

Yay! Wonder where they finally found some money. The original plan had Phase 2 done in 2016, but since Phases 1 & 2 were combined, it's now just one year behind schedule.

Glad to see that they'll allow turns from NB Maine into the Fish Market. The current traffic phasing plan (from 2010) assumes that Phases 1 and 2 would be built separately, and doesn't show how the Fish Market would be accessed during Phase 2 construction.

Net result: Water Street will be closed from 7th St SW up to the market, so plan accordingly. No through car traffic uses Water,* but many cyclists use it as a connection from the Tidal Basin to P Street (and the Anacostia trail beyond); glad to know that we'll be able to turn off NB Maine before the 12th St. Expy. tunnel. Or maybe, for the time being, just take 7th up to the Mall instead.

* And hence I really cannot understand how this could possibly cause the traffic apocalypse that I've heard several locals worry about.