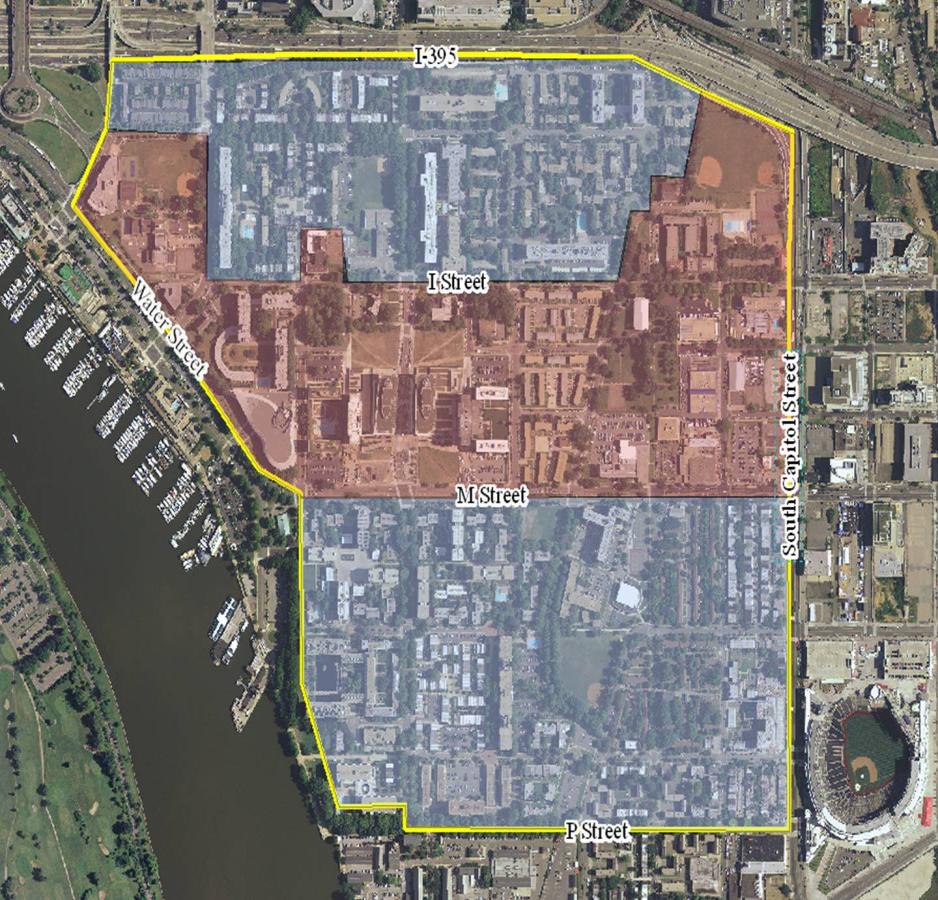 While more than 250 people attended the Southwest Neighborhood Plan kickoff public meeting in September, turnout for the second meeting on December 11 was much lower. During the meeting, the audience was presented with the results of the Existing Conditions Analysis and detailed demographic data from the market study that is underway for the study area. There were ten themes that emerged from the September meeting from comments made by those who attended:
Existing Conditions Analysis
Even though Southwest is not currently in a historic district, several buildings have been registered with the Historic Preservation Review Board, including Potomac Place, Arena Stage, Waterfront Tower, and others, while Randall Recreation Center and Capitol Park Tower are pending designation. Southwest is unique in the city for its block structure, which is much longer than the typical block length in the city, a result of urban renewal.

Several of the streets in Southwest have dead-ends due to the reconfiguration of the neighborhood during urban renewal. Only a few streets connect through the neighborhood to other areas, such as Maine Avenue/M Street (which carries between 17,800 and 26,400 cars per day), I Street (a section of I Street, SE in Near SE is currently under construction), South Capitol Street, and 4th Street. Vehicular access may not be ideal, but the entire planning area is within a 10-minute walk from a Metro station and 20 bus lines serve the area. Capital Bikeshare access is spotty, though - only one station is located in the planning area.

Most of the publicly owned land is on the east side of Southwest and that is where there is the highest potential for change. These sites include Greenleaf, MPD first district headquarters at M Street and Delaware Avenue, the DMV just to the east, the FEMS Maintenance facility, as well as the inspection station and the privately owned lots along South Capitol Street. The Southwest Neighborhood Plan will not make recommendations for changes to existing, established residential areas, but will make suggestions to improve amenities such as parks and open space.


Market Analysis
The consultants hired by the Office of Planning to conduct a market analysis of the area concluded that there are minimal and limited opportunities for office and retail development, respectively; however, there is strong opportunity for housing development. The market analysis looked at the planning area as well as a larger South of the Freeway submarket including Southwest and Capitol Riverfront. Within the planning area, there are 11,768 people in 6,600 households – population growth in the area has been half of the city-wide rate of 12.5% since 2000. With the projected influx of new housing to the area, the number of households could increase by 2,000 by the year 2020, a possible increase of 30%. The planning area is a bit older, with fewer children and less affluent, but more educated than the city as a whole.


Housing values in the South of the Freeway submarket increased by 3.9% since 2003, which is lower than the 6.3% growth seen citywide. As a result, housing is relatively affordable compared to the city as a whole, both home prices and rents. Part of the reason for the relative affordability is the amount of subsidized housing that is in the planning area. There are seven DCHA developments and 19% of all units in the planning area are subsidized, compared to 13% citywide. Approximately 14% of the planned housing units in the planning area are projected to be subsidized and any public land that is redeveloped will contain a subsidized component, so income diversity will likely be retained. Prior to 2013, there had been no new rental apartment development in the planning area in decades. Physical barriers, the lack of retail and amenities, limited “buzz”, and insufficient return on investment has quelled housing development in the area. With the opening of Camden South Capitol in April 2013 and Sky House in early 2014, that dynamic is starting to change. For-sale housing has been built more recently, including Capitol Square at the Waterfront in the early 2000s, Potomac Place Condos in 2005, and the conversion of Potomac Place Tower and Waterfront Tower later in the decade. The newcomers to the area will most likely be younger and wealthier with more disposable income to spend out at restaurants and other retailers.

On the office side of things, the newest office buildings are the ones built on 4th Street in 2010 as a part of Waterfront Station. As of 2010, there were 10,365 jobs in the planning area. Most of the office space in the submarket (including Waterfront Station) is occupied by Federal or City government agencies. Due to the lack of private sector tenants in the area who typically pay higher rents, the average rent paid by office tenants in the South of the Freeway submarket is $44 per SF compared to the citywide average of $53 per SF. Vacancy is also higher here than in the city as a whole – 15% vs. 10.5%. These factors contribute to a poor opportunity for near- or mid-term office development for the two office pads at 4th and M streets; however, once it is built and occupied, new office space could have an impact on retail. The Wharf development could be a potential competitor to 4th Street, but if that project is successful, there could be positive spillover to 4th Street.

Retail in the market area is concentrated on 4th Street and South Capitol Street. In the South of the Freeway submarket, the vacancy rate is elevated – 20% compared to the citywide average of 5%. Rents are also lower – $28 per SF compared to $38 per SF in DC. Over at 4th Street, retail rents are higher than the citywide average, ranging from $35 to $45 per SF. While 4th Street has the appropriate population density, spending power, access, and retail-ready space for neighborhood goods and services retail, other factors are lacking, including sufficient daytime population, a location within a retail destination, “buzz”, a competitive landscape, and sales that cover build-out and operating costs. There are even less conditions in place currently for food and beverage retail to operate successfully and general merchandise retail currently has nearly no chance of success. The Wharf will be a destination and will attract different types of retail than the neighborhood goods and services retail that is on 4th Street; however, the development can draw foot traffic to 4th Street.

Next Steps
The next Southwest Neighborhood Plan meeting will be on Saturday, January 25 from 9am to 12pm at the Capitol Skyline Hotel (10 I Street). This meeting will focus on a broad vision for development and urban design for the sites in the planning area that have the greatest potential for redevelopment.

Map courtesy of DC Office of Planning
Posted by SWill at 12:14 AM