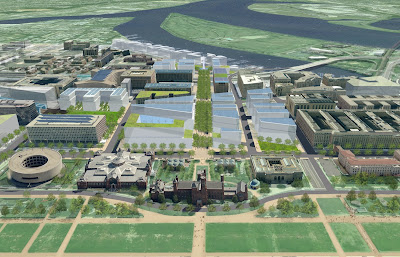 The National Capital Planning Commission (NCPC) held a public meeting on December 4th to discuss its preliminary long-term and interim recommendations for the 10th Street corridor as a part of the SW Ecodistrict. There are several initiatives simultaneously underway in the general vicinity of the project area. Within the larger SW Ecodistrict area is Federal Triangle South, where GSA will soon issue a Request for Proposals (RFP) to redevelop five parcels it owns from 12th Street to the west, to 6th Street to the east, to Independence Avenue to the north, to Maryland Avenue and a portion of D Street to the south. The northern portion of 10th Street is included within Federal Triangle South. The Office of Planning recently conducted a Small Area Plan for Maryland Avenue, which will intersect with 10th Street when the historic L’Enfant roadway is reconstructed. DDOT is currently undertaking a year-long transportation study of Maryland Avenue. A new SW Business Improvement District, which includes the SW Ecodistrict boundaries, is in the process of being formed and if approved, will begin services next spring. Just to the north of the SW Ecodistrict, the Smithsonian is working on a master plan to improve the southern section of the National Mall in the vicinity of the Smithsonian Castle. Slides from the December 4 NCPC presentation are available here.


10th Street is envisioned as an urban garden promenade that extends the civic character of the National Mall to Banneker Park. The Forrestal complex would be demolished which would allow new streets to be introduced to the area, including Virginia Avenue and Maryland Avenue. This will reduce the blockiness of the building design that’s currently in place. The width of the right-of-way along 10th Street is recommended to be the same as it is today (150 feet), but the sidewalks are narrowed from 29 feet to 24 feet; a five-foot bike lane is added on either side of the street; the roadway on each side is reduced from 26.5 feet to 20 feet; and the median is expanded from 39 feet to 52 feet.

On the northern section of the street where it is at-grade, a large tree canopy is recommended with trees growing as high as 50 feet in a linear garden. A “Magnet” Plaza to draw people to 10th Street from the Smithsonian Castle is recommended with a water feature near its northern terminus with Independence Avenue.

Where the street meets L’Enfant Plaza, an Urban Plaza is recommended. The design of the urban plaza can take shape in a variety of forms, including a framed water feature in the median, an architectural feature in the median, a design that encompasses the right-of-way, and stretching out the plaza from the edge of a building to the east to the building on the west.

Further south, garden rooms are envisioned with shorter trees cascading down to Banneker Park. Pedestrian access through the tree canopy in the northern section and in the southern section would be limited, but the greatest amount of pedestrian crossings would be at the Urban Plaza near L’Enfant Plaza. Programming space could be accommodated at the “Magnet” Plaza, at the intersection with reconstructed Maryland Avenue, and at the Urban Plaza.

Short-term improvements include changes to the street where it meets Independence Avenue, programming, wayfinding signage, and connections.

Public comments will be accepted until December 31.