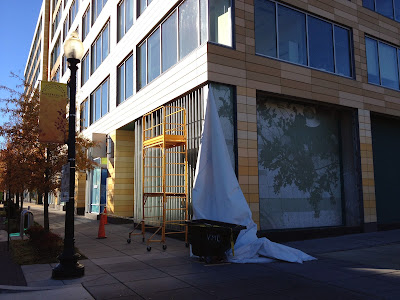 I've been holding off on posting about this because I wanted to get more information to share, but some of you may have noticed that work has been underway since last month on the Masala Art restaurant space at 1101 4th Street.  The two vacant spaces next to Subway will be transformed into a 4,000+ SF Indian restaurant over the next several months. Word has it that the restaurant will open in June 2014, although I have not been able to get confirmation from the owner yet.  It was first learned back in May that the restaurant would be coming to Waterfront Station, joining Station 4, Subway, and Z-Burger as the fourth restaurant to open on 4th Street. There are still two other vacant retail spaces on 4th Street, one each at the 1101 and 1100 buildings. Once I get more details about Masala Art I'll be sure to share them.
Posted by SWill at 11:30 PM

Not a big fan of Indian cuisine, but considering the service at STATION FOURty Minnute Wait For Your Server To Bring Your Cold Food And Refill Your Tiny Drink Glass, I guess I'll be there on grand opening day!

Masala Art is GREAT Indian food, especially by DC standards. It's a poor man's Rasika! I can't wait for them to open up! I've been eating at their Friendship Heights location on and off for years and have always enjoyed my food there.