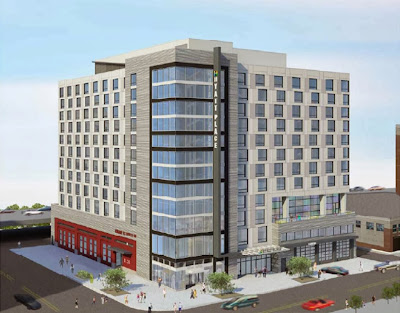 Unfortunately, I was unable to attend the groundbreaking ceremony last Friday at 400 E Street, the future home of Engine 13 and a Hyatt Place hotel. It was especially disappointing because this project was the subject of my very first blog post more than five years ago. At the time, DMPED put out a solicitation to bid on two parcels - one located at 4th and E streets and the other at 6th and E streets, the location of the current Engine 13 firehouse. Eventually, DMPED chose E Street Development Group, which proposed an office building with a firehouse on the ground level and space for the DC Central Kitchen and Kid Power Inc. on the 4th and E parcel. In the years since the team was chosen, the design has changed from the original fire engine red building to the current rendering above, as well as the intended use from office to hotel due to changing market conditions.

Hyatt Place was announced back in October as the operator of the 214-key hotel and is planned as an "upscale select-service hotel." Although the ceremonial groundbreaking occurred on Friday, there is no digging occurring yet on the site. There is a construction trailer now on site, though. The hotel and firehouse are scheduled to open in 2015.

Rendering courtesy of WDG
Posted by SWill at 12:09 AM