The second Southwest Neighborhood Plan meeting will be held on Wednesday, December 11 from 6:30 to 9pm at Westminster Church, located at 400 I Street. The previous meeting was back in September at Arena Stage and was well attended. The Southwest Neighborhood Plan study area extends from South Capitol Street to Maine Avenue and from P Street to Interstate 395. The plan will focus on four key elements – people, parks, connections, and building. A project website and a second website called “Engage Southwest” have been created where community members can interact.

DDOT will be hosting an Anacostia Waterfront Initiative (AWI) transportation master plan update initiative meeting for the South Capitol Street corridor will be held on Thursday, December 12 from 6:30 to 8:30pm at the Capitol Skyline Hotel, located at 10 I Street. The AWI is a 30-year, $10 billion series of transportation, environmental, economic, community and recreation projects that are transforming the shores of the Anacostia River into a world-class waterfront. The AWI Program area stretches from the Tidal Basin to the city’s northeast border with Maryland.

The Southwest Neighborhood Assembly will have its annual holiday party on Monday, December 16 from 6 to 9:30pm at the Pier 7 Restaurant at the Channel Inn. All those attending will be able to order from the menu (menu items range from $14.95 and up). All entrees come with side salad and fresh baked loaves of bread. One check will be issued per table due to the unique seating arrangement in the dining room. 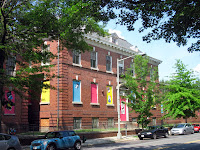 A second Randall Neighbor Day will be held on Saturday, December 21. The first one was held on November 30. All residents of Southwest and Near SE (Zip codes 20024 and 20003) get free admission to the Corcoran - normal admission is $10. This community benefit was negotiated with the ANC back when the Corcoran was planning to move its College of Art + Design to the Randall School site. Those plans fell through and now the Telesis/Rubell team is seeking PUD approval for a new modern art museum, a restaurant, commercial space, and 550 residential units; however, Randall Neighbor Day remains. Current exhibitions at the Corcoran include Alex Prager: Face in the Crowd and Mia Feuer: An Unkindness. The Corcoran is located at 500 17th Street, NW and will be open from 10am to 5pm.
Posted by SWill at 11:02 PM