Review of "Love in Afghanistan" 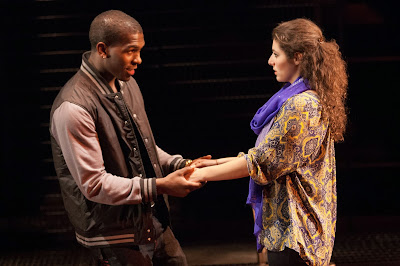 The world premiere of Charles Randolph-Wright’s Love in Afghanistan, directed by Lucie Tiberghien, has made its debut at Arena Stage. Love in Afghanistan takes place on a military base in Kabul where an American rapper who comes to the country to perform for the troops falls in love with an Afghan interpreter. Melis Aker plays Roya the interpreter; Khris Davis portrays the rapper named Duke; Joseph Kamal is Roya’s father Sayeed and Dawn Ursula plays Duke’s British-Jamaican mother Desiree.

The love story seemed forced and the lack of chemistry between the two main characters was evident. If anything, the tryst between Sayeed and Desiree seemed more authentic. The best part of the show was toward the end of the first act and the beginning of the second act, but the rest of the performance was forgettable. Desiree’s character provided some comic relief and for the most part this task was accomplished, but again, the lines seemed forced and not natural. This love story in a faraway land was not properly executed in my opinion.

Love in Afghanistan runs until November 17 in the Arlene and Robert Kogod Cradle and tickets are between $40 - $90.

Photo by Teresa Wood, courtesy of Arena Stage
Posted by SWill at 9:19 AM