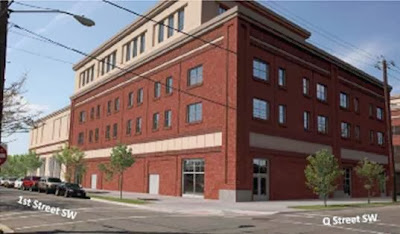 Here is an update on the Buzzard Point development potential post from last month. Pepco closed on the sale of the Lyon Bakery, across the street from the proposed DC United stadium site at 2nd and R streets, on October 31. Now, Pepco owns the entire block bounded by 1st Street, R Street, Q Street, and 2nd Street, which includes the James C. Dent House and Ana Towing. The utility company has plans to build a new substation on the site, which will be able to handle the increased demand for power in the Southwest Waterfront, Navy Yard, and a portion of Capitol Hill. The vacant, but historic James C. Dent House on Q Street will not be part of the substation and will remain intact, but its intended use is still being determined by Pepco.  The new Waterfront Substation has been designed to look like an office building and the bricks used will resemble the architecture of buildings at Fort McNair.

Neighbors of the proposed substation site, many of whom are public housing residents, are concerned about the potential health risks associated with living near a substation. At Monday's ANC 6D meeting, commissioner Hamilton brought up those concerns to representatives from Pepco and inquired why the substation has to be built at that site and not on other property owned by Pepco in the neighborhood. A substation's role is to step down high voltage power that comes from a power plant down to levels that can be distributed to homes. Pepco representatives stated that there are several studies by the World Health Organization about the electromagnetic field (EMF) generated by a substation and its health effects are negligible. They will provide the ANC with a list and photos of substations throughout the city that are located adjacent to residential buildings, including the Ritz Residences Georgetown.

In addressing the proposed location of the substation, Chris Taylor from Pepco stated that the northern portion of the land owned by Pepco near the Buzzard Point Plant will be used for construction of the proposed DC United stadium. Other portions of the property are still in use and cannot be moved to build a new substation. While the generation portion of the Buzzard Point Plant has been decommissioned, the top two levels are still in use as a substation. Those two upper floors will be decommissioned once the new Waterfront Substation is complete in 2016. The plant's future is uncertain, although SWNA recently submitted an application for historic designation of the art deco building.

The Waterfront Substation will be built in two phases, with the first phase covering the northern portion of the site. Installation of underground duct banks to carry transmission lines will begin in 2014, while construction of the substation will begin by May 2015 with completion by the end of 2016. Although an exact start date on the second phase has not been determined, it's anticipated that construction would begin on the addition 5-10 years after the first phase is built. As Pepco goes through the approval process, there will be a community meeting to give updates. In addition, information will be available on their website.

With a new substation, DC United stadium, Frederick Douglass Bridge, and traffic oval, Buzzard Point will be one big construction zone for the foreseeable future.

Rendering courtesy of Pepco
Posted by SWill at 9:27 AM

Oh God not another ugly, useless building being preserved. At least do the decent thing and get rid of those annoying smokestacks!