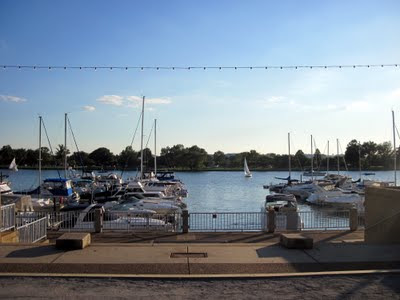 In another sign that the transformation of the Southwest Waterfront to The Wharf will soon begin, houseboats at the Gangplank Marina have started to be relocated to temporary quarters. For instance, some houseboat owners at F Dock near 7th Street are being shifted south to C Dock. The houseboats are being moved so construction can begin on phase one of The Wharf. During this phase, the Capital Yacht Club will be moved from its current location next to Jenny’s Asian Fusion at 1000 Water Street and rebuilt between 7th and 9th streets. Back in August, Kastles Stadium at The Wharf was dismantled. No financing agreement has been publicly announced yet for the project and therefore no official construction start date has been set.
Posted by SWill at 12:45 AM

What will happen the the current Wharf (the actual seafood vendors - Captain White's, Jessie's, etc.) during and after the redevelopment?

what will happen to*

The Maine Avenue Fish Market is NOT included in this phase of development. Phase one ends right around where Phillips and Jenny's are located. The developers have yet to release details about the fish market since they won't have to go through the PUD process for that section of The Wharf for a few years. However, they have stated previously that the fish market will remain and be enhanced with additional uses.

When is phase one development supposed to actually begin and be completed? I'm new to SW and by looking at the www.swdcwaterfront.com website development should have started awhile ago.

Phase one should start construction around the first quarter of 2014 and be completed in 2017.

Where did you get that info? I can't find anything on the web re The Wharf.

What will happen to King Ribs? I support the Wharf redevelopment but I hope King Ribs can stay.

Speaking of King Ribs, does anyone know what the hours are for His Highness?

Thurs - Sunday, depending on the weather.

Thanks so much, Ben!