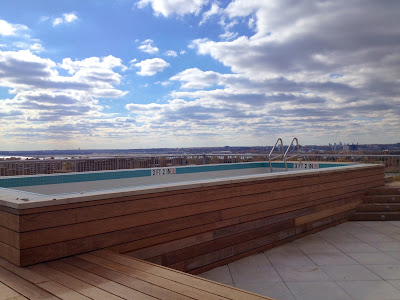 Ahead of its grand opening on December 2nd, the folks over at Sky House gave a media tour today of the east tower building. Some of the finishing touches are still being made to the building, so the photos still show construction activity. Sky House is the adaptive reuse of the former EPA towers at Waterfront Station, with the east tower having the address of 1150 4th Street.  Construction of the east tower began in February 2012 with the west tower beginning a few months later. This will be the second apartment building to open in Southwest this year - Camden South Capitol opened in April. Vicki Davis and Alan Lederman from Urban Atlantic led the tour of Sky House. JBG is also a partner in the development and will manage the property.


There are a total of 530 units in both buildings, with the east tower having 266 units and the remaining 264 units in the west tower. Twenty percent of the units will be affordable for households earning up to 50% of Area Median Income (AMI), which is $43,000 for a family of two. Both buildings will be at least LEED-Silver, with energy-saving LED lighting and recycled materials among some of the green features.

Some of the unit features include electronic key entry, hardwood floors in the living areas, granite countertops, stainless steel appliances, movable islands, glass enclosed showers, ceiling fans in the bedrooms, walk-in closets, and floor-to-ceiling glass windows. That floor-to-ceiling glass in the living area comes in handy for several units that contain bedrooms without windows. Instead, most of these interior bedrooms have glass near the ceiling to allow natural light into the rooms. LED lights have also been installed by those glass panels to provide additional mood lighting in the evenings. Most of the units have 9’6” ceiling heights, but units on the third and 12th floors have 12’ ceilings.


The common areas have been designed by RD Jones to give a “clubby” feel and Davis calls some of the building amenities “trendsetting for the area, but also a harbinger of things to come for the DC market.” One of those innovations is the parking, which will be shared with the office building next door. There are 140 spaces licensed to the residential units, resulting in a parking ratio of approximately 0.5 per unit, double the minimum amount allowed by zoning. The theory behind the parking solution is office workers will use the parking spaces during the day and residents will use the same spaces in the evenings. Sky House will be one of the first buildings in DC to utilize a shared parking solution.  Most of the building amenities are located on the first two floors, which include a Wi-Fi lounge called “Link”; a work station area called “Solve”; a two-level fitness center called “Kick Fitness” with a personal trainer on staff and towel service; 24-hour concierge service; an entertainment kitchen; game room; club room; and an elevated deck with water features, garden area, seating, and BBQ grills. A few units will have private entrances to the shared deck space. A pet grooming area will be located in the basement, along with bike racks.

The rooftop features a small swimming pool and observation deck with unobstructed 360 degree views of Southwest and beyond. One can see as far away as Tysons Corner, National Harbor, and the National Cathedral. Safeway is just steps away next door at 1100 4th Street.

The target tenant demographic that the project was designed for is professionals aged 25-40. Rents will range from the $1,600s for studios to the low $2,000s for 1BRs and up to $3,000 and above for the largest 2BR units. The unit mix includes 13% studios, 59% 1BRs, and 28% 2BR units. A new website will soon launch for Sky House with leasing and move-ins on the lower floors beginning on December 2nd.
Posted by SWill at 4:58 PM

Wow! Thanks for the preview of (and view from) Sky House.

I'm assuming that doesn't include utilities?

As far as I know, utilities are not included.