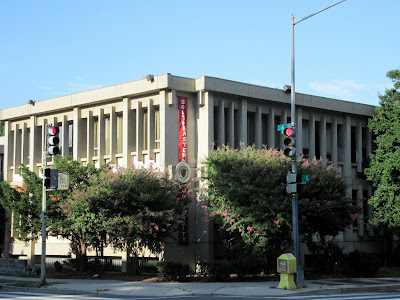 It was reported in Capital Business today that The Shakespeare Theatre Co. has the former Southeastern University (SEU) campus at 6th and I streets under contract.  The campus has been vacant since The Graduate School USA absorbed SEU and the university lost its accreditation in 2009. At first, it was thought that The Graduate School USA would expand its L’Enfant Plaza campus to 6th and I streets, then it was announced in 2011 that the school would be the anchor tenant at The Wharf. Afterwards, the campus was put on the market. There were some suitors for the campus, including Apple Tree Early Learning Public Charter School, who wanted to renovate the building for a school, but that proposal never resulted in the sale of the building. It was announced publicly last week that The Graduate School USA had backed out of The Wharf deal due to federal government budget issues.

The Capital Business article states that the Shakespeare Theatre Co. proposes an actors’ campus for the site, which would include actors’ housing, rehearsal space, and storage for costumes and set equipment.  It would not just serve as a campus for Shakespeare, but it could also serve other theater companies who have similar space challenges. From the article:

Neither Shakespeare nor Graduate School USA officials released the terms of the contract. [Chris] Jennings said he is in the early stages of determining how to finance his idea. Shakespeare could partner with a developer on a mixed-use project in which some of the market-rate housing helps pay for the artist and theater space. He also plans to approach D.C. officials about support the government may be able to provide.

The campus is slightly under one acre in size and is currently zoned as R-3, which allows matter-of-right development of single-family residential uses (detached, semi-detached, and row dwellings), churches, and public schools. Depending on what Shakespeare has planned, the campus may need to be rezoned. Next door to the campus is Amidon-Bowen Elementary school and row homes. Across the street is the SW Duck Pond. It is located two blocks north of Arena Stage and three blocks from the Waterfront Metro station.
Posted by SWill at 6:17 PM