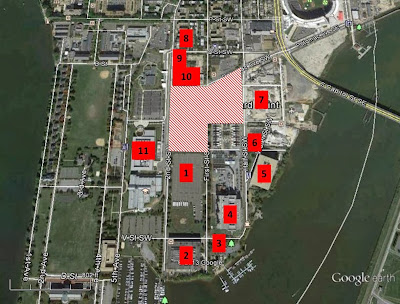 (This post will appear in the South by West article in November's Hill Rag.)


With news that a new stadium may be built for DC United in Buzzard Point (or “The Point” as Capitol Riverfront BID President Michael Stevens is now calling it), reporters and bloggers alike have been in a frenzy over whether the stadium deal is a good one for the city and if the area near the proposed site will benefit. Currently, Buzzard Point contains mainly industrial uses, but there are a few sites that are either planned for development or are candidates for redevelopment. A new soccer stadium nearby may accelerate plans for the following properties:

(1) 100 V Street
Akridge owns a two-acre portion of the stadium footprint as well as the remaining seven acres of 100 V Street located to the south of the stadium site. 100 V Street was originally planned as an office complex targeted for a secure federal tenant; however, the site was not able to attract a tenant. With the potential development of the stadium on the northern section of the property, the southern portion is now being reevaluated as a mixed use project. 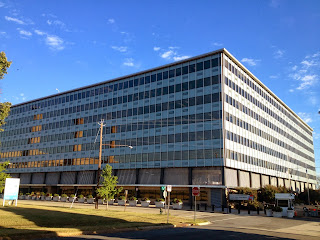 The U.S. Coast Guard has moved out of the Transpoint Building at 2100 2nd Street located just to the south of 100 V Street, to a new headquarters complex at St. Elizabeths in Congress Heights. GSA has found a temporary replacement for the Coast Guard with the Navy taking space at the Transpoint Building. Meanwhile, owner Monday Properties has no plans to redevelop the building, which sits near the confluence of the Anacostia River & the Washington Channel and currently blocks public access to the water. With GSA cutting back on leasing new space and a new soccer stadium planned up the street, would redevelopment of this building make sense?

A 99-unit condo project called Marina Place with about 2,000 square feet of ground floor retail is planned for a parcel to the east of the Transpoint Building and adjacent to the Buzzard Point Marina at First and V streets. The Eric Colbert-designed building was approved by the Zoning Commission in 2011 and since then, the owner has been looking for a developer partner for the project. 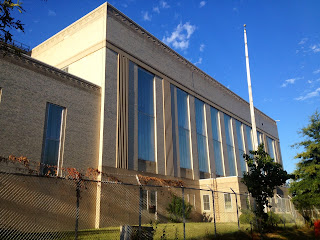 The art-deco Buzzard Point Plant building, located to the southeast from the stadium footprint, was decommissioned last year by Pepco, although the substation to the north is still in use.  Recently, the Southwest Neighborhood Assembly has applied for historic status for the building, which could be a candidate for an adaptive reuse akin to Tate Modern art gallery in the Southwark section of London.

(5) 1900 Half Street
Douglas Development owns an office building at 1900 Half Street along the Anacostia River that blocks public access to the river and is occupied by the U.S. Coast Guard. 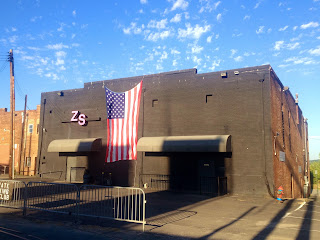 One of the gay nightclubs displaced from Near Southeast when Nationals Park was built moved to Buzzard Point and is located just to the east of the soccer stadium footprint. According to an article from The Blade, the proprietors of Ziegfields/Secrets lease the building from Denver businessman Marty Chernoff. The article speculates that the club may have to move yet again once the stadium is built, even though it is located outside of the stadium footprint. It is too early to know what would be built in its place if the nightclub is moved again.

(7) Florida Rock
Florida Rock moved its operations across South Capitol Street in 2012 to make way for the eventual development of their riverfront parcel just to the south of Nationals Park. Their new operation along Half Street is now across the street from the new stadium site.

Carr Hospitality submitted plans for a 109-room hostel and hotel with 489 beds in 2010 at 129 Q Street, one block north of the stadium site.  According to the zoning application, half of the hostel/hotel will be comprised of rooms with single and double beds and in-room bathrooms. The other half of the hostel/hotel will be comprised of dormitory styled rooms and shared female and male showers on each floor. Shared guest amenities will include: a hip lifestyle lounge, game areas for children and adults, a bean bag movie theatre, self-service kitchen, guest laundry, lounge lockers, a cyber lounge, complimentary breakfast and a shuttle bus service to the Waterfront Metro station. The Zoning Commission approved the project, but afterwards, a principal from Carr who spearheaded the project passed away and the site has been tied up in probate ever since. A 2-year extension was recently granted for the project due to probate and the difficulty in obtaining financing for a hospitality project during the Great Recession. It is estimated that probate will be settled sometime in 2013, so theoretically, the project will be able to move forward. Currently, the site is home to a taxi cab service and repair garage.

(9) James C. Dent House
Pepco owns the James C. Dent House at 156 Q Street, which was designated as a National Historic Landmark in 2010. It was built in 1906 by William James Palmer for James C. Dent, a former slave who moved to Buzzard Point as a laborer and eventually helped found the Mount Moriah Baptist Church and became its pastor. The home was more recently used as the headquarters of the now defunct Southwest Community House, a non-profit organization that vacated the property in 2004. It has remained vacant ever since.

(10) Lyon Bakery
Lyon Bakery is a wholesale baker located just to the north of the stadium footprint at 135 R Street. This site has redevelopment potential once the stadium is built, or at least will have a new customer across the street. 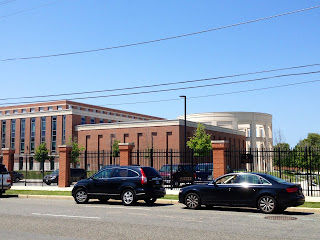 While there is no development potential here, Fort Lesley J. McNair would be the stadium’s neighbor to the west across 2nd Street and pre-dates any other development at Buzzard Point since the Army post has been at this site for over 200 years. The fort is the headquarters of the Army’s Military District of Washington and includes the National Defense University.
Posted by SWill at 12:46 AM

Do not let anyone try to kill off the name "Buzzard Point." Attempts to do so should be challenged every chance you get!