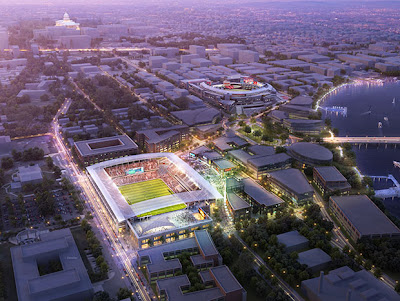 Today, Mayor Vincent C. Gray, DC United officials and the affiliated national unions of the Washington DC Building & Construction Trades Council announced an agreement on a Project Labor Agreement (PLA) for construction of the new DC United soccer stadium, to be located in Buzzard Point. As part of the selection criteria for the stadium builder, DC United has agreed that they will obligate the selected contractor to honor the PLA.

The PLA is similar to the agreement used for construction of Nationals Park. According to City Administrator Jack Lew, who negotiated the agreement, “We were able to build the Washington Nationals ballpark in 24 months due to the strong partnership with labor. The ballpark had to open in time for the start of the season and we got it done with 52-percent District-based certified business enterprises and 82-percent First Source participation,” said Lew. “I’m confident we will have similar success on the soccer stadium.”

The soccer stadium PLA ensures that the project will use union labor for subcontracts valued above $6 million. Any trade packages below that threshold are automatically provided a waiver to the PLA, thereby allowing smaller, often non-union firms, to bid on and perform work. All non-union firms can bid on any phase of construction and are free to take advantage of union training programs.


Upcoming milestones for the project include:

Rendering courtesy of Gensler
Posted by SWill at 10:55 PM

I am at this time in the process of purchasing a brand new property that individuals appreciate and are also enthusiastic to the up coming vacation,steel building