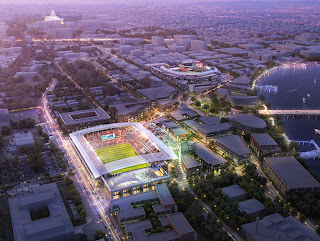 It was reported in Capital Business today that the city and Akridge have agreed on ground rules to do a land swap for a portion of the DC United stadium footprint owned by the developer. In exchange for the stadium acreage, the District will give Akridge the Reeves Building at 14th and U streets, NW. Both parties have determined that the Reeves Building land is worth more than the Buzzard Point property, but in order to determine the value of both, three appraisers will perform a valuation of the land. From the article:

The panel of appraisers would provide their estimates in writing to the District and Akridge by Oct. 14. By Nov. 1, D.C. and Akridge are to have entered a definitive agreement to complete the swap and Lew plans to submit that — along with other Buzzard Point land agreements — to the D.C. Council by Nov. 15, which would give the council time to consider a stadium package before the end of the year. The land deals would close 30 days after council approval.

Akridge will maintain ownership of the rest of their 100 V Street site in Buzzard Point, which most likely has increased in value since the announcement of the stadium deal. According to the article, the date of valuation for the Akridge parcel has to be the day before the announcement of the stadium deal, so the appreciation of value isn't considered in the land swap.

An aggressive timeline was set by the city and DC United to complete negotiations for the stadium when the two signed a term sheet back in July. Since then, DC United has agreed to use union labor for large contracts to construct the stadium. The team hopes to play their first game in Buzzard Point by March 2016.

Update:  A second article in The Washington Post mentions that the DC Council has been briefed on the stadium deal and has concerns, including the compressed timeline, whether revamping RFK Stadium has been thoroughly vetted, the land swap, and the tax abatement for the team.
Posted by SWill at 9:01 AM