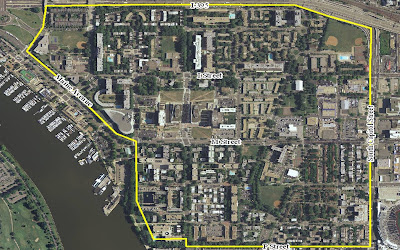 A Public Kickoff meeting related to the Southwest Neighborhood Plan will be held on September 11th from 6:30pm to 9:30pm at Arena Stage. Over the next 6 months, the DC Office of Planning will be engaging Southwest residents and stakeholders to create a community led plan to guide the changes in the Southwest neighborhood for the next 5 to 10 years. The Southwest Plan will focus on four key elements – people, parks, connections, and building.

The project area contains a number of underutilized District-owned properties, including Randall Recreation Center, NE parcel of Waterfront Station, First District headquarters, Lansburgh Park, the DMV inspection station, and DCFD Repair Shop/Engine Co. # 7, among others. One of the main reasons for the Southwest Neighborhood Plan is to provide guidance for the future of these parcels. It was reported in Housing Complex earlier this month that a couple of the parcels that may be in play to trade for land in Buzzard Point for a new DC United soccer stadium are 1001 and 1101 Half Street, home to the DMV inspection station and DCFD Repair Shop/Engine Co. #7, respectively.

OP has created a project website and will soon create a second website called “Engage Southwest” where community members can interact. Other ways to participate in the process include using social media (use the hashtag #SWDCPlan on Twitter, “like” posts on Facebook, etc.), submitting hand-written comments or questions at the public meetings, calling the Office of Planning at 202-442-7600, or sending an email to Melissa Bird, Ward 6 Planning Coordinator.