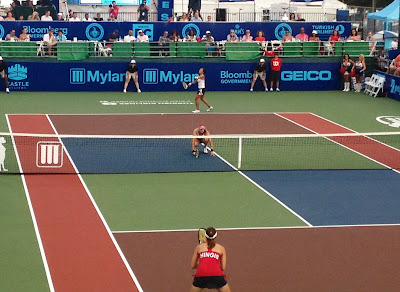 Congratulations to the Washington Kastles for winning their third straight Mylan WTT title with a convincing 25-12 win on Sunday, July 28 against the Springfield Lasers. After a two-hour rain delay, the Kastles won five straight sets to capture their fourth King Trophy in the past five years. Earlier in the season, the Kastles broke the record for the most consecutive wins by a U.S. professional sports team with 34 straight wins. The Kastles have played the past three seasons at Kastles Stadium at the Wharf along Water Street. It's unclear at this point what will happen to the stadium as development is supposed to get underway on The Wharf during the off season.
Posted by SWill at 11:58 PM