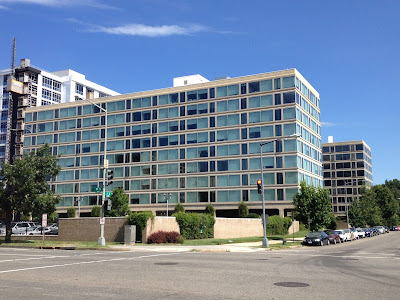 Last month, the DC Historic Preservation Review Board (HPRB) designated both multifamily buildings at Town Center East and the grounds as historic.  It has also requested that the nomination for historic preservation be forwarded to the National Register of Historic Places. The buildings, located on 3rd Street between K Street and M Street, were designed by I.M. Pei and built in 1960-61.   Originally built as apartment buildings, Waterfront Tower was converted to condos in 2009. Meanwhile, 1001 at Waterfront was last renovated prior to its sister building’s conversion, but has remained as apartments. The two buildings at Town Center are the mirror image of the two apartment buildings to the west of Waterfront Station at The View at Waterfront (or Town Center West). Those two buildings are not included in the historic designation. In its ruling, the HPRB determined that Town Center was eligible for historic designation in three categories, including “Architecture and Urbanism”, “Creative Masters”, and “History.”  According to the ruling, “Town Center East is important as one of Washington’s best examples of mid-century Modernism, and certainly among the best in Southwest.”

The owners at Waterfront Tower, along with the Southwest Neighborhood Assembly, applied for historic designation in response to a PUD submitted by The Bernstein Companies to build two large multifamily buildings on the parking lots of the existing Pei buildings and a smaller building on the courtyard separating the two existing buildings. It was reported in the Washington City Paper about the tension between Bernstein and the Waterfront Tower owners. With the historic designation in place, Bernstein will need to alter its PUD and have it approved by the HPRB in addition to the Zoning Commission.


In recent years, other residential complexes in Southwest have been designated as historic, including Potomac Place Tower, Tiber Island, and more recently, Harbour Square. Other residential complexes built during urban renewal may apply for historic designation as they turn 50 years old. Thus far, individual buildings have been applying for historic designation, but eventually a historic district may be coming to Southwest, which would preserve the mid-century modern architecture of the neighborhood.