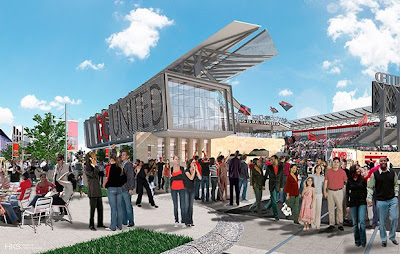 Who says nothing gets done in DC over the summer?  The Washington Post reports that District officials and DC United have reached a tentative deal to build a new $300 million stadium for the team in Buzzard Point, a few blocks southwest of Nationals Park at 2nd and R streets.  DC United currently plays at RFK Stadium, which is more than 50 years old. The area where the new stadium is planned is currently dominated by industrial uses and is adjacent to Fort McNair. The new stadium will seat between 20,000 and 25,000 people and can host other events besides MLS matches. The Post’s story is ahead of an official announcement on Thursday.

While metro access is not ideal compared to RFK – the nearest Green line stations are several blocks away – a new streetcar line is planned to run near the new stadium. In addition, there will be limited parking available at the stadium due to the tight footprint; however, parking lots used for Nationals games could presumably be used by United fans when the Nationals are not playing.


The District will split the costs with DC United, with the city paying for land assembly and infrastructure costs while the team will pay for stadium construction. It appears that the city will not have to pay much for the land, but instead will use land swaps to obtain the land it needs. One of the District assets under consideration for a land swap is the Reeves Center at 14th and U streets, NW.  Presumably, the Reeves Center would be swapped for land owned by Akridge at 100 V Street.  Additional information about the tentative deal from the article:

D.C. United would be granted a 25- to 35-year lease for the land and would have the opportunity to develop restaurants, shops and possibly a hotel along Half Street. A sales and use tax abatement worth as much as $2.6 million in its first year is also a part of the tentative deal.

The earliest the stadium would open is 2016. Perhaps one day, Potomac Avenue, which will connect the two stadiums, could become an entertainment district lined with shops and restaurants, a far cry from what the area looks like now. There will most likely be a lot of coverage of this stadium deal over the coming days, weeks, and months, so stay tuned!

Renderings courtesy of HKS and Gensler
Posted by SWill at 10:46 PM

F**k yes. If this gets done, this will be so smart of the city and does a lot of good for our community!

Anyone know why Potomac Avenue doesn't follow the naming pattern of the District's other avenues (i.e., states)? If it's of no historic value, might be cool to rename it Champions Way or something sport-like if they want to develop it as a food/retail venue connecting the ballpark and soccer stadium, could be a fun area of sports bars and athletic-themed retail outlets and some mid-priced hotels for fans.