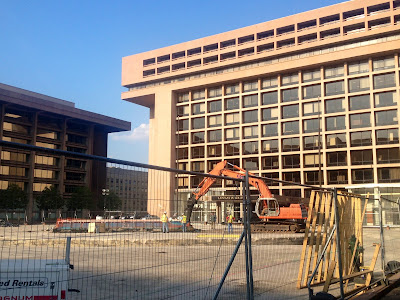 Construction is well underway on phase 2 of the retail revamp at L'Enfant Plaza.  Over the past month, the pyramid that used to be located in the courtyard has been removed. In its place, an atrium will serve as an entrance to the retail area and provide natural light. Once complete in 2014, there will be double the amount of retail space that's already in place.

In the existing retail area, JBG has a scale model of the second phase development and in it includes retailers that may be coming to L'Enfant Plaza. A mix of restaurants, fashion, fitness, and sports bars were shown in the model. Those include: Cosi, Burger King, Naan and Beyond, Dress Barn, PNC Bank, Chick-fil-A, Anytime Fitness (a 24-hour gym), Firehouse Subs, Phillips, Panda Express, Einstein Brothers, Ben & Jerry's, a Japanese restaurant, GNC, Croutons (a west coast fast casual restaurant), Crisp and Juicy (Peruvian chicken restaurant), and Green Turtle. Judging from the amount of people who are in line for lunch at the first phase retail on a daily basis, there's more demand for restaurants at L'Enfant Plaza.  Meanwhile, renovations are set to begin this month on the north office tower, similar to the work already done on the east tower.

Rendering courtesy of SmithGroup JJR
Posted by SWill at 8:18 AM

swill - Welcome back buddy. I remember a few months ago you mentioned something about an electronic board that was supposed to be located outside the Waterfront train station. Any update?

I'll see what I can find out.