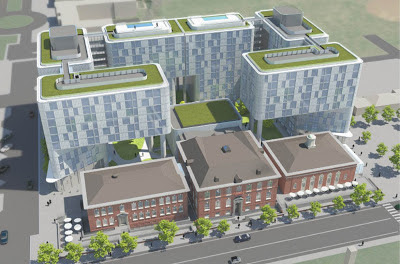 At long last, a revised PUD application for the Randall School site at 65 I Street was filed on May 31 with the Zoning Commission. The Telesis/Rubell team has had the shuttered school under contract from the Corcoran since 2010 and since then has been working on plans for the site. With the help of Bing Thom Architects, the team has come forth with a plan to preserve the three existing historic buildings along I Street for use as a contemporary art museum and other arts uses, as well as a restaurant. Other newer additions will be removed.

The museum will be located in the original 1906 center building; other arts-related uses will be located in the west wing; and a restaurant with outdoor seating will be in the east wing (both wings were built in 1927). Behind the center building, a new four-story addition will house additional exhibition space for the art museum.  The new addition will have exterior walls that will allow images and video to be displayed that will be visible from a large courtyard open to the public. Two 12-story towers with 550 residential units will wrap behind the historic buildings and courtyard.

Following is a description of the design of the residential buildings from the PUD application:

The new twelve-story residential building will be set behind the historic Randall School. It is comprised of nine distinct blocks that are stacked around the west, north and east sides of the site and behind the historic school structures to the south. These forms enclose a publicly accessible courtyard and run parallel to H Street, the former Half Street and former First Street, thereby physically defining these streets in the neighborhood. Gaps between these building blocks emphasize their proportions and recall the slab building forms common in the Southwest neighborhood. The lower six levels of the new south west and south east building elements are cut at an angle leading into the center of the site in deference to the historic buildings. It is at these points that the entrances to the residential "towers" will be located just behind the historic buildings to the east and west. Six levels above these entries at the south side of the courtyard are two building wings that span from the perimeter of the building to columns on either side of the new museum structure. Ground floor units facing 1st Street, H Street and the courtyard will have individual entrances and private outdoor spaces along the street or at the interior courtyard. The site and public space in front of the historic buildings on I Street will be modified to make the historic buildings accessible and to provide opportunities for street side café seating. The massing concept, which evolved through a series of meetings with District agencies and the staff of the Historic Preservation Office, places a majority of the project’s density away from the historic building toward the rear of the site. The sensitive massing of the new construction allows the historic Randall School to continue to appear as a separate building along I Street, and maintain the character of the existing streetscape.


The building materials used for the residential buildings are primarily metal panels and glass arranged in an irregular format to contrast with the structured facades of the historic buildings. The main entrances will be located on the southwest and southeast corners of the buildings. Some sustainability elements include rain-water harvesting, urban forestry best-practices, and green roofs. Each residential building will have a rooftop pool and separate amenity space on the ground level. Parking for 200 vehicles will be below grade and six surface spaces along the right-away of 1st Street. Access to the parking garage and loading will be off of H Street.

An extensive public benefits package is proposed for the project, which includes:


The project is phased so the museum, other arts uses, retail, and the east residential building will be done first. The west residential building can be built in a later phase. The Telesis/Rubell team will have to come before ANC 6D for their support before meeting with the Zoning Commission later this year.