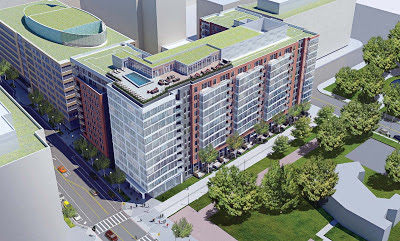 Representatives from Waterfront 1001 4th Street, LLC, which proposes a residential building for the NW parcel of Waterfront Station, came before ANC 6D at the May monthly meeting to garner support for their Stage 2 PUD, which includes a 365-unit high-rise rental apartment building with 2-level townhouse units at the base. Also included are three spaces of ground-floor retail totaling 4,400 SF. More details on the PUD can be found here. The commissioners unanimously supported the PUD, under two conditions: the commissioners want to encourage more retail at the project and the developers need to create a construction management plan to limit disturbance to the SW Duck Pond during and after construction. The developers are scheduled to go before the Zoning Commission on June 6th.

Meanwhile, Sky House has recently been placed on the market by Urban Atlantic and The JBG Companies. The still-under construction pair of rental apartment buildings totals 530 units with 20% of the units reserved for residents earning up to 50% of Area Median Income. According to the sales brochure, the East tower is expected to be completed this December and the West tower in March 2014. The buildings are expected to sell before tenants move in to avoid TOPA rules. Due to the size of each of the buildings, it is doubtful that either of the buildings will switch to condominiums since the pre-sale requirements for buildings financed by Fannie Mae or FHA are still quite stringent. In addition, Bresler Reiner is selling their interest in the two planned M Street office buildings and NW parcel. Vornado and Forest City will continue to be partners in the development.


On the retail front, the four vacant retail spaces in 1100 and 1101 4th Street are still on the market three years after the office buildings were completed, but it was revealed in Monday’s ANC meeting that the current owner USAA is in negotiations with a potential tenant to take two of the retail spaces north of Subway at 1101 4th Street. New banners were recently placed on the light poles along 4th Street to help give the area a sense of place as the “Main Street” of Southwest. Per the Stage 1 PUD approval, it is required that all of the retail at Waterfront Station must be neighborhood-oriented retail. What neighborhood-oriented retail should open at Waterfront Station? Vote on the left sidebar for your choice and/or leave a comment.

Rendering courtesy of Perkins Eastman
Posted by SWill at 9:57 PM

At one point, Walk Score used to break down the score by category. The categories that most pulled down my score were, in order:
- shopping
- restaurants & bars
- banking
- coffee
- entertainment

That there's not even an ATM available at night, when Safeway/CVS are closed, is pretty galling. (And yes, high Walk Scores directly correlate with higher property values!)

It occurred to me when reading about the DC United land swap talks (and potential changes at Greenleaf) that MPD HQ or other city offices could come to M St, whether in the planned Waterfront Station buildings or in new buildings on DC-owned land closer to Half Street.