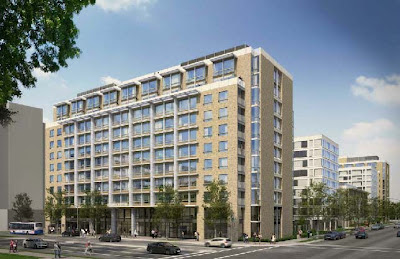 In addition to the NW parcel PUD, there was lengthy and fiery discussion at Monday’s ANC 6D meeting about a PUD application for Town Center, a three-building residential plan for the area just to the east of Waterfront Station by The Bernstein Companies.  More details on the original PUD application can be found here, but in summary, the developers plan to build two 11-story residential buildings with a small amount of ground floor retail on the parking lots in front of Waterfront Tower and 1101 @ Waterfront and a four-story building along 3rd Street between the two existing I.M. Pei buildings for a total of 401 new units. In addition, the 128-unit 1101 @ Waterfront will be renovated. Some changes have been made to the design of the buildings in response to concerns from the commissioners, such as an increase in the setback of the buildings on the 10th and 11th floors (which are rise above the I.M. Pei buildings) and more glass at the base of the building. The above rendering is from the original submission to the Zoning Commission.

The room was packed with residents of Waterfront Tower condos, who according to a couple of stories last week in Housing Complex, were threatened by the developer’s lawyer with a lawsuit if they spoke out against the proposal at the ANC meeting since their purchase agreements included a statement that they would not impede further development on the site. Waterfront Tower and SWNA recently submitted an application for historic status for Waterfront Tower and the grounds, which could halt development if approved. ANC Chairman Andy Litsky chided the Bernstein representatives present at the meeting about the tactic before opening the floor to residents who wanted to express their concerns about the PUD. Concerns ranged from the design & height of the buildings to lack of visibility to accessibility challenges for disabled residents. After more than an hour of discussion, the commissioners passed a resolution seeking to postpone the May 30th Zoning Commission meeting (the developers agreed to the delay after hearing the concerns from residents at the meeting) and a second resolution to not support the PUD in its current form until a long list of concerns are addressed. Bernstein will meet with Waterfront Tower residents and the ANC over the next few weeks to help address their concerns (one of the ANC’s stipulations was that the residents were able to discuss the PUD without the threat of a lawsuit over their heads). This PUD will most likely be on the agenda again in the June ANC meeting.

Rendering courtesy of Maurice Walters Architect, PC
Posted by SWill at 9:00 AM

"Fairfield at Marina View" was mentioned a few times, and some newer residents may want to be apprised of it. It is/was a substantially similar PUD (11 story towers at the corner, low townhouses in the middle) for the west side of Town Center Towers that was not only proposed but approved by the city and even the historic preservation office. There's much more about it online:
http://www.nbm.org/about-us/publications/blueprints/renewing-urban-renewal.html
http://dcmud.blogspot.com/2009/08/southwest-im-pei-apartment-sold-at.html
http://southwestquadrant.blogspot.com/2008/08/new-construction-at-marina-view.html