SW BID in the Works 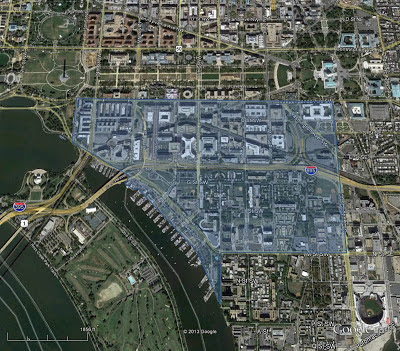 (This post is an abbreviated version of the South by West article that will appear in June's Hill Rag.)

There are currently nine Business Improvement Districts (BIDs) in the District of Columbia and by this fall, a 10th could be created right here in Southwest. BIDs are funded by a property assessment levied on property owners in order to provide services such as cleaning, hospitality, marketing, beautification, planning, safety, event organizing, and programming. In the case of Southwest, commercial property owners and large apartment building operators will be taxed, while condo and co-op buildings, as well as single-family/townhouse owners will not. Organizations such as the Waterfront Gateway Neighborhood Association, a group of six homeowner associations located south of the Southwest freeway, may have the option to opt-in for certain services, such as landscaping and security.

While the Capitol Riverfront BID includes a small portion of Southwest in Buzzard Point, the proposed Southwest BID will cover a large swath of the quadrant. The proposed boundaries of the Southwest BID are Independence Avenue to the north, 15th Street and the Washington Channel to the west, M Street to the south, and South Capitol Street to the east. This geography includes a diverse area, including the federal enclave around L’Enfant Plaza; the existing residential communities north of M Street; Waterfront Station; Arena Stage; as well as The Wharf development.

Steve Moore, who was once the Deputy Director of the Downtown BID, is now with Hoffman-Madison Waterfront and is helping to get the Southwest BID off the ground. Hoffman-Madison Waterfront is the master developer of The Wharf project along the Southwest Waterfront and during the Planned Unit Development process for that project, the possible creation of a BID was one of the line items the developers agreed to undertake.

Services could begin as soon as next spring, but before that happens, a lot still needs to happen over the next few months. Solicitations went out to commercial property owners in April to gauge interest in forming a BID. A bylaws structure still needs to be firmed up as well as incorporation as a non-profit, raise funds, and get legislation introduced into the DC Council establishing the BID. Some of the goals of the Southwest BID are to help give the area an identity and program public spaces, along with the more conventional BID services such as street cleaning. While the GSA is not allowed to be taxed for BID services, they will be involved in the BID in some capacity. While the creation of a BID will not be the cure-all for everything that ails Southwest, it can help with some basic issues such as cleanliness and safety, which could go a long way towards making the area a more enjoyable place to live and help to market the neighborhood for additional investment, retail, and office tenants.
Posted by SWill at 9:54 PM