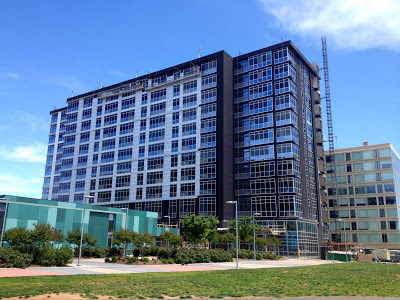 Work continues on Sky House East, the first residential phase of Waterfront Station, developed by Urban-Atlantic and The JBG Companies. The new façade of metal and glass is a far cry from the concrete behemoth that once was the headquarters of the EPA. Sky House was designed by Wiencek + Associates. Construction began in February 2012 and a commencement ceremony was held the following month. On the other side of 4th Street, work began a few months later at Sky House West. Upon completion, both buildings will have a total of 517 units – 20% of which will be affordable to families earning up to 50% of Area Median Income.  Leasing is scheduled to begin over the next couple of months on the East tower. Below are a few older and current construction photos.

Of course I'm happy to see this development from one-vacant (and ugly buildings). That said, I fear the architectural choices of these windows will quickly look dated -- just think about any 1970s-looking building. This will surely feel similarly obsolete in about 20 years. Why can't architects stick to "timeless" designs?