Review of "Other Desert Cities" 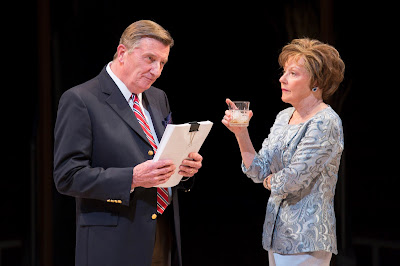 Directed by Kyle Donnelly and written by Jon Robin Baltz, Other Desert Cities tells the story of the Wyeths, an affluent conservative family from California who from the outside appear to be perfect, but their hidden secrets cause tension when daughter Brooke Wyeth returns home to Palm Springs for the holidays after a six-year absence. Her pending memoir threatens to reopen wounds from the most painful portion of the family’s history.  The cast includes Helen Carey as matriarch Polly Wyeth (Carey last appeared in Arena's Long Day’s Journey into Night), Larry Bryggman as patriarch Lyman Wyeth, Emily Donahoe as daughter Brooke Wyeth, Scott Drummond as son Trip Wyeth, and Martha Hackett as Polly’s sister Silda Gauman. Carey’s performance as the strong-willed and stubborn Polly was excellent. The profane nature of Trip and the one-liners of recovering alcoholic Silda brought comic relief; however, I thought the character of Brooke was a bit annoying. The plot twist towards the end of the show was unexpected.

Other Desert Cities is the last show of the season at Arena Stage, which runs until May 26 in the Fichlander Stage. Tickets are $40 - $85. Southwest Night will be on May 26 at 7:30pm. Over the summer, One Night with Janis Joplin will return for a seven-week run from June 21 – August 11.  Next season will bring the return of Kathleen Turner as well as Bill Pullman. Below is the lineup for the upcoming 2013-14 season:

The Velocity of Autumn
Written by Eric Coble/Directed by Artistic
September 6 – October 20, 2013 in the Kreeger Theater

Tappin’ Thru Life
Created by and starring Maurice Hines/Directed by Jeff Calhoun
November 15 – December 29. 2013 in the Kreeger Theater

Guess Who’s Coming to Dinner
Based on the screenplay by William Rose
Written by Todd Kreidler/Directed by Kenny Leon
November 29, 2013 – January 5, 2014 in the Fichlander Stage

Smokey Joe’s Café – The Sounds of Leiber and Stoller
Written by Jerry Leiber and Mike Stoller/Directed by Randy Johnson
April 25 – June 8, 2014 in the Fichlander Stage