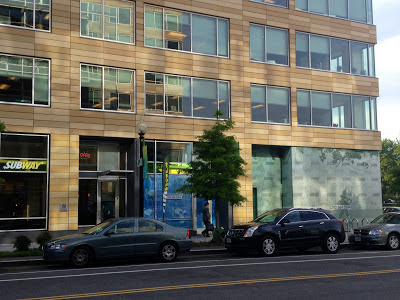 I just learned from ANC 6D Commissioner McBee that Masala Art will be opening at Waterfront Station and will take up the two vacant storefronts at 1101 4th Street, north of Subway. Masala Art is an Indian restaurant by Atul Bhola, the former manager of Heritage India, with a location in Tenleytown that opened in 2009.  According to a review by The Washington Post's Tom Sietsema, the Tenleytown restaurant seats 45. The Tenleytown location is open daily for lunch & dinner and it also offers free delivery.  Here's a look at the menu. Masala Art will join Station 4, Z-Burger, and Subway as the fourth restaurant to open at Waterfront Station, in addition to Safeway, CVS, and Waterfront Cleaners. There are still two vacant retail spaces available - one each at 1101 and 1100 4th Street.  I’ll share more details on Masala Art as I learn them.
Posted by SWill at 12:00 PM

Awesome news - thanks for sharing!

Woo hoo! Great news! I love Indian food. Besides a nail salon, this is the second best thing that could open in the neighborhood. Please keep us updated on progress (and especially an anticipated opening date).

Yippee!! I can taste the naan right this second.

Great news! (Although I hope it doesn't take too much business away from Lucky Kabob - the current best Indian takeout in SW)