Review of "The Mountaintop" 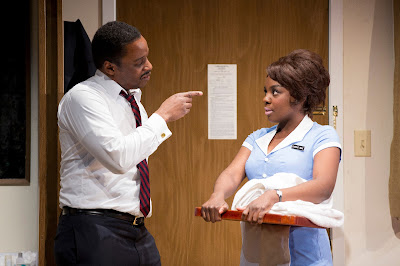 The Mountaintop, written by Katori Hall and directed by Robert O’Hara, reimagines the last night of Dr. Martin Luther King’s life before his assassination at the Lorraine Motel in Memphis, Tennessee. While preparing for a speech he was to give the next day, Dr. King receives a visit from a maid that turns into a life-changing experience. Both actors gave powerful performances – Bowman Wright as Dr. King and Joaquina Kalukango as Camae, the maid. There were moments of levity interspersed with raw emotion, such as when King tries to negotiate with God to extend his time on Earth. The performance was more poignant given I saw the show on April 4, which was the 45th anniversary of King’s assassination.

Growing up I had a certain view of Martin Luther King, Jr. and for the most part, that was not the image of King I saw portrayed on stage, which wasn’t necessarily a bad thing. In The Mountaintop, King was portrayed as a human being – flaws and all, not as the saintly civil rights leader that he has become over the years. It was a bit jarring at first to see King in this way and took offense at some of his actions, but his humanity made the show that much more interesting and thought-provoking about how we see our American heroes.

Photo taken by Scott Suchman, courtesy of Arena Stage
Posted by SWill at 11:00 AM