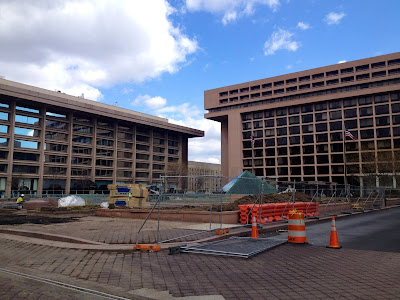 Some changes have occurred inside and outside L’Enfant Plaza over the past few weeks. First off, Sandella’s Flatbread Cafe has opened in the food court area. Meanwhile, the area where the pyramid skylight is located has been sealed off as a part of phase two of the renovation project. Construction has begun on the new glass atrium that will be built on the plaza, which by 2014 will be the new entryway to the retail area of L’Enfant Plaza facing 10th Street. SmithGroup has designed the new atrium and retail center. More shops and restaurants are slated to open next year. Back in 2011, JBG was hoping to bring a fitness center and child care facility to the second phase, and talks with grocers to open a small store were not successful. Some sit-down restaurants are envisioned for the second food court and they hope to "push the envelope" with having some of the stores stay open later and on weekends. No word yet on when the Homewood Suites extended-stay hotel will begin construction at 9th & D streets.


Rendering courtesy of SmithGroup JJR
Posted by SWill at 12:15 AM