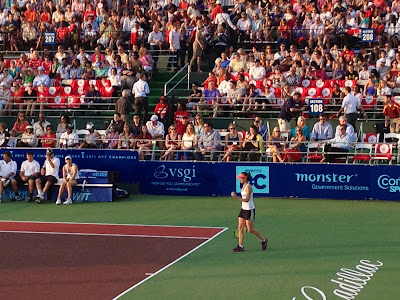 Former World #1 and reigning WTT Female MVP Martina Hingis will be joining Venus Williams and the rest of the Washington Kastles this season at the team defends its second consecutive WTT championship in July. Hingis played for the New York Sportimes last season. The other Kastles players returning this season besides Williams include Leander Paes, Bobby Reynolds, and Anastasia Rodionova. Serena Williams won’t be joining the team this season due to schedule conflicts. Arina Rodionova will not be returning as well.

Also at stake this season is the team’s winning streak, which at 32 is the second longest consecutive winning streak in professional sports. With just two more wins, the Kastles will surpass the 1971-72 Los Angeles Lakers’ long-standing record. The first two matches of the season will be home games, so there will be a chance to see the record being tied and beaten at Kastles Stadium. Below is the home match schedule for the 2013 season:

All matches at Kastles Stadium begin at 7pm.  This season, the playoff and championship matches will be played in the home court of the higher-seeded team, so there is a chance that as much as two post-season matches could be played at Kastles Stadium. Season tickets are available now.
Posted by SWill at 8:13 AM