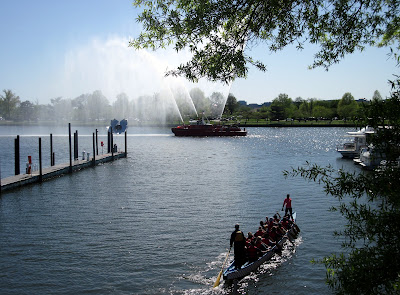 Spring is finally here and with it comes the annual National Cherry Blossom Festival. This year’s SW Waterfront Fireworks Festival will take place on Saturday, April 6 from 1pm – 9pm, which will be produced by the Washington Waterfront Association and Hoffman-Madison Waterfront.  There will be four main stages set up along the waterfront during the festival. The opening ceremony will take place at Kastles Stadium at The Wharf with musical entertainment throughout the day from military and reggae bands. In addition, there will be a food truck rally, a beach with games, a beer garden, along with the Very Cherry Marketplace with fine art and crafts.


Over at the Washington Channel Stage, the John Glenn fireboat will parade along the channel with its spray jets, as well as paddle boat & dragon boat excursions, and DC Sail sailing activities. In the evening, the channel will be illuminated with pink lights from the houseboats at Gangplank Marina, the grand lantern will be illuminated, along with lighted Koi in the water, welcomed by the Nen Daiko Japanese Drummers who will be on a barge in the channel. Gangplank Marina Park will have more musical acts, face painters, model boat-making, strolling costumed characters, and Japanese-inspired balloon art. 7th Street Landing will also have jazz performances, windsock-making, and Japanese lantern crafting & origami. The fireworks show will begin at 8:30 and last until 9pm. This year’s peak bloom is forecast to take place during the fireworks festival!