Lansburgh Park to Get New Additions This Summer 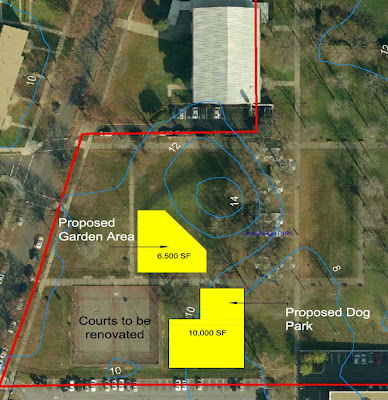 Progress is being made to bring new amenities to Lansburgh Park, the largest park in Southwest (if you don't count the National Mall), located along Delaware Avenue roughly from K Street to L Street and backs up to the DMV. Two organizations have been busy raising funds and garnering support to build a dog park and a community garden. The PAWS of Southwest have received approval from the Department of Parks and Recreation (DPR) to build a 10,000 square-foot dog park to the east of the tennis courts. There will be two areas - a 2,000 square-foot area for small dogs and 8,000 square feet for large dogs. The project is fully funded and plans are to break ground this summer. The District will contribute towards the basics and PAWS will fund the rest. A new blog was created to help the SW Waterfront community with tips for handling and training your dog in an urban environment called Waterfront Woof League.

Meanwhile, the SW Community Gardens group has plans of their own for a garden to be located to the northeast of the tennis courts in a 6,500 square-foot space. DPR has also been working with the garden group, which is affiliated with the Southwest Neighborhood Assembly. The group was recently the recipient of a $50,000 grant in a nationwide competition from Fiskars called the 2013 Project Orange Thumb Garden Makeover. According to the press release:

Their proposed “Lansburgh Park Community Garden” was envisioned as a place for meditative gardening and community programming for veterans, youth and seniors. The new [6,500] square-foot garden will provide educational opportunities and give community members a place to reap the rewards of growing their own fresh food. Plans are underway for a one-day Fiskars Project Orange Thumb garden makeover in partnership with The Home Depot Foundation in July 2013.

Volunteers from the community will be needed to help put the garden together.
Posted by SWill at 8:40 AM