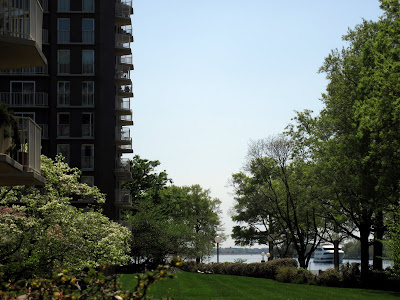 It was reported in April's The Southwester that Harbour Square, located at 500 N Street, received historic designation last month by the District's Historic Preservation Office for its mid-century modern design. From the article:

The Historic Preservation Office report found that Harbour Square is characterized by its plantings and hardscape, designed by the acclaimed landscape architect Dan Kiley, who had previously collaborated with [Cholethiel Woodard] Smith on Capitol Park. Kiley's ambitious landscape plan was divided by the buildings themselves into multiple themed gardens, the most impressive being the one-acre “Aquatic Garden,” which contains a pool with its own willow tree on a square island. The pool is the main element of a central courtyard onto which most apartments look, and is also seen through the glassy ground floor of the surrounding buildings. This inter-penetrability of interior and exterior spaces and the integration of nature into the urban fabric are hallmarks of modernism. In fact, the Historic Preservation Review Board found that Harbour Square's green spaces were of "extreme importance" and that "the work of Smith and Kiley together is not separable as part of the overall concept." The complex was praised as "a benchmark for good design" and "a model for new urban renewal."