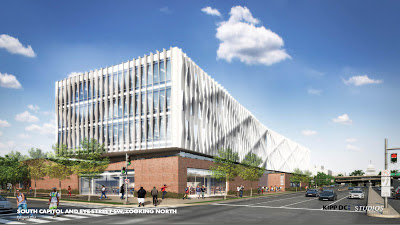 - A couple of editorials in The Washington Post have been written recently on KIPP DC's proposal to build a new charter high school on the site of Randall Recreation Center at South Capitol and I streets. First up is one called District Officials Oddly Unwelcoming to a KIPP Charter High School, authored by the Post's editorial board (disclosure: the Chairman & Chief Executive of the WaPo is on the board of trustees of KIPP DC). The other editorial called No Need to Rush Decision on Randall Park was written by Felicia Couts, President of Capitol Park IV Condominium Association board, which is located next door to Randall.

- In what appears to be the result of a domestic dispute, there was a fatal shooting in a residential building at the 1200 block of 4th Street, one block south of the Waterfront metro according to The Washington Post.
Posted by SWill at 8:45 AM

In other crazy crime news, there was this from the PSA 105 minutes:

"An 18 year old male shot his partner in crime while fighting over the possession of a gun.... both subjects were suspects in robberies outside of the PSA 105 area. A SW resident noted that the shooter was one of three juveniles who were involved in the robbery/beating death of a SW resident on 6th St. SW in October 2008."

We need to figure out something to do about juvenile crime...how can you rob and kill someone and five years later still be out robbing and shooting people? He should have been locked up.