Venus Williams Returns to the Kastles 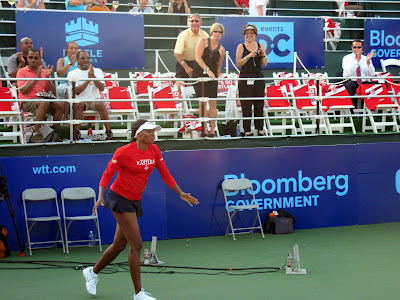 Venus Williams will return to the Washington Kastles roster this season as they defend their Mylan World Team Tennis championship for the second year in a row. The Kastles will play once again at Kastles Stadium at The Wharf, but it will most likely be their last season at the current location since redevelopment of the Southwest Waterfront is scheduled to begin sometime in 2013. The team has been undefeated since moving to The Wharf in 2011 and at 32 wins in a row are one game away from tying the all-time major professional sports unbeaten streak set by the 1971-1972 Los Angeles Lakers.

The 2013 season will run from July 7 - 24.  The home match schedule has not been released yet, but Andy Roddick of the Springfield Lasers and Sloane Stephens of the Philadelphia Freedoms will visit Kastles Stadium this season. Coach Murphy Jensen will return this season as well for the Kastles. It's unknown whether Serena Williams will be back this season due to scheduling issues.  The rest of the team will be chosen during the roster draft on March 12.
Posted by SWill at 12:01 AM

I never will understand the logic of having the Kastles stadium (or whatever you call it) at the current location. It's a huge eyesore on the waterfront not to mention the encroachment onto Water Street. The season runs for less than a month yet we are subjected to the hideous structure for 12 months out of the year. Hoping the wrecking ball arrives on July 25 to tear it down.

Kastles have done great things for SW. So the stadium is there longer than the short 1 month season... The Kastles how off the SW waterfront area to over 20K people in a month. Many people didn't even know our area existed. I hope they stay! Not to mention all of the good work they do in the community...