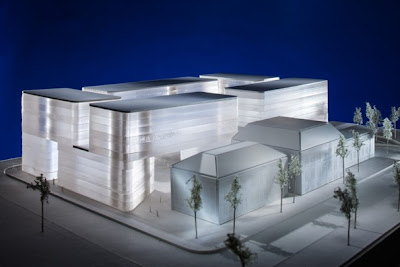 It has been reported both in Urban Turf and The Washington Post that plans have been updated for the Randall Junior High School site on I Street, to be designed by Bing Thom Architects (the same firm that redesigned Arena Stage). From the Post article:

[Bing Thom] also released a more detailed plan for the complex’s reuse, which includes museum space, residential units and two culinary wings that might be devoted to a restaurant and cooking school. A large auditorium wing could become a dining room. The most innovative idea in the mix would be “culinary incubators,” small pop-up style restaurants run for discrete periods of time by top young chefs.

There will be approximately 440,000 square feet of residential space arranged in an accessible courtyard behind the historic buildings in a mix of townhouses and apartment buildings. The planned development of the Randall School site by the Telesis/Rubell team is located next door to Randall Recreation Center. KIPP DC may be awarded the right to build a charter high school and rebuild a new recreation center for the community at that site through an agreement with the city; however, the Telesis/Rubell team feels that a charter school is incompatible with their plans for a mixed use complex next door.

Telesis/Rubell is supposed to come before ANC 6D at the March meeting to give an update on their plans and hope to go through the zoning process later this year. That was their same plan of action last year after meeting with the ANC, but the project has been delayed, so (borrowing a catch phrase from my blogger neighbor to the east) we shall see…

Rendering courtesy of Bing Thom Architects
Posted by SWill at 8:43 AM