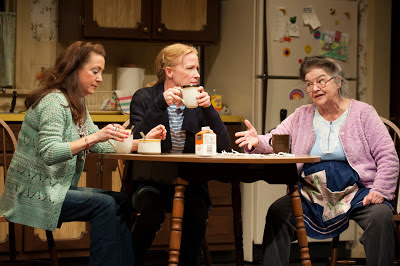 Good People, written by David Lindsay-Abaire and directed by Jackie Maxwell, takes place in South Boston’s Lower End, where minimum wage is the maximum wage and hard work and sacrifice don’t ensure success. Tony Award nominee Johanna Day takes on the starring role of Margaret (Margie) Walsh, a single mother of a special needs child who loses her job and struggles to make ends meet. She turns to an old flame named Mike (played by Helen Hayes Award winner Andrew Long), a doctor who made it out of South Boston, in hopes that his good fortune can somehow improve her own. Rounding out the cast is Francesca Choy-Kee as Kate, Michael Glenn as Stevie, Rosemary Knower as Dottie, and Amy McWilliams as Jean. Good People highlights the differences (and similarities) between the classes using comedy, but is very effective in getting the point across. The harsh reality of rough economic times was vividly portrayed on-stage.  I thoroughly enjoyed this production with its mix of drama and comedy and recommend seeing it if you can.

Good People runs from February 1 – March 10 in the Kreeger Theater at Arena Stage.  Southwest Night has already passed for Good People, but ticket prices start at $40. In conjunction with the production and Ward 6 Council member Tommy Wells’ office, the Looking for Good People Job Fair will be held on Friday, March 1 at Arena Stage from 10 am to 2pm. Recruiting companies onsite will include Comcast, Entertainment Cruises, CSX Railroad, Department of Employment Services (DOES), DC Water, Giant Foods, Gordon-Biersch Brewery Restaurant, Safeway, US ARMY Baltimore Recruiting Battalion, Wal-Mart and Washington Metro Transit Authority (WMATA), among others. Organizations including D.C. Housing Authority Workforce Development Office; Dress for Success; The Graduate School, USA; Living Classrooms; Street Sense; Strive D.C. and the United Planning Office (UPO) will also be offering one-on-one workforce development services to enhance interview skills and strengthen job-seekers' ability to get hired. Be sure to bring multiple copies of your resume and dress professionally if attending the job fair.

Photo courtesy of Arena Stage, taken by Margot Schulman
Posted by SWill at 6:05 AM