Parcel 5 Hotels at The Wharf Up for Review 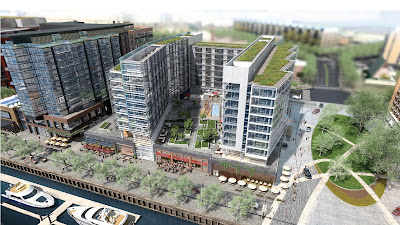 JBG will come before ANC 6D at their February 11 meeting to present their plans for the two hotels proposed at Parcel 5 of The Wharf. These hotels are part of phase one of the project, but are being presented separately from the recently approved Stage 2 PUD application by Hoffman Madison Waterfront.

There will be a 160-key extended stay hotel on the east side and a 245-key limited service hotel on the west side of Parcel 5, which are rumored to be an Element and aloft hotel; both brands are a part of the Starwood Hotels & Resorts portfolio. Element hotels are built to be eco-friendly, with floors made of recycled materials and energy-efficient lighting and plumbing fixtures, to name a few examples. aloft hotels are billed by Starwood as "hip" and are typically found near airports or downtown areas. Both hotels will reach 110 feet, which is lower than most of the other buildings planned for phase one of The Wharf. A total of three hotels will be built at The Wharf; in addition to the two planned at Parcel 5, an Intercontinental Hotel is planned at Parcel 3b.

Smith Group JJR has designed both hotels. The design of the extended stay hotel is described in the PUD application as the following:

The building takes advantage of the views and reduces its massing by subdividing the typical rectilinear bar into four smaller, slightly rotated, volumes focused on the river.  The modern glass and metal panel façade will provide a serene backdrop to the 7th Street Park.


The design of the limited service hotel from the PUD application is described below:

The 245 guest-room hotel is composed of a glass façade with articulated horizontal mullions evoking a modern interpretation of a warehouse. The façade has been set back from the Mews in order to enhance the views and provide a series of outdoor terraces at the Plaza level.


The west side of the parcel faces Jazz Alley, with ground floor retail space catered towards small-scale music and artistic venues while the Wharf Street frontage will have restaurants.  The Maine Avenue side will have fast casual restaurants and neighborhood serving retail while the 7th Street Park side will have specialty retail.


There willl be space for a large plaza on the second level which will contain amenity space for both hotels, including a pool.  JBG will aim for LEED-Silver or higher for both hotels on Parcel 5.


Renderings courtesy of Smith Group JJR
Posted by SWill at 12:49 AM

I've stayed at both Element and Aloft hotels in the past, and really look forward to having fun hotels nearby for visiting guests. Their hotel lobbies have amenities (like local beers, board games, and convenience food for sale) that we don't have in the neighborhood. I'm sure that the hotels are delighted to find a site so close to both downtown offices and a major airport.

This buildings looks amazing. Thought is hard to think that the coast for building one of this hotels may be the same than building many buildings for the living of low classes.
In 2000 I lived to Buenos Aires, and it was shocking seeing an entire neighborhood for high classes with gigants constructions growing out of the blue in Puerto Madero while there was a big luck of apartments in buenos aires for middle classes.

Really great post, Thank you for sharing This knowledge.Excellently written article, if only all bloggers offered the same level of content as you, the internet would be a much better place. Please keep it up!
hotels in centerville iowa

Excellent Blog! I have been impressed by your thoughts and the way you
try this site