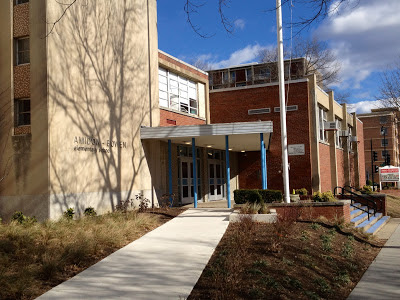 A new turf surface is being installed at Amidon-Bowen Elementary School which replaces the basketball courts that were previously in place.  Basketball courts will be built later this year at Lansburgh Park to replace the ones removed at Amidon-Bowen. The new turf football/soccer field is part of $500,000 worth of new outdoor play space that is coming to the school, which itself was renovated extensively over the summer. Besides the turf area, there will be two playgrounds and a couple of short running lanes. In addition to play areas, a greenhouse is planned for an area next to the playground reserved for younger children. Below are a few photos, both before and "after."