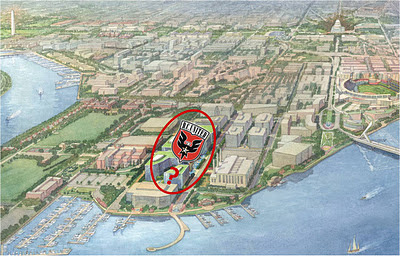 It looks like the prospects for a new DC United stadium in Buzzard Point are more promising according to an article in last week’s Soccer Insider from The Washington Post.  From the article:

In his first comments about the proposal in several months, [DC United’s managing partner Jason] Levien said: “The stars are aligning in a good way for us. We’re working closely with the right people and we feel better about it today than we did three months ago, no question.”

There have been some false starts with the search for a new home for the team; announcements have been made in recent years that a stadium would be built in different locations, including Poplar Point in Anacostia and Prince George’s County, but both of those proposals failed. A move to Baltimore has also been ruled out by the team and the focus now is to stay in the District in order to build a new stadium to replace aging RFK stadium. This time around, negotiations have been done mostly outside of the public eye, perhaps a lesson learned from previous announcements. More from the article:

“Interaction with the city has been very positive and very productive,” Levien said. “We’re pushing the right buttons and making things happen in a good way. … There is more than hope. We are very hopeful.”

Could there be an announcement on a Buzzard Point stadium deal before DC United’s home opener on March 9 against Real Salt Lake?  That would be very optimistic, but we shall see…

Rendering courtesy of Akridge
Posted by SWill at 8:23 AM