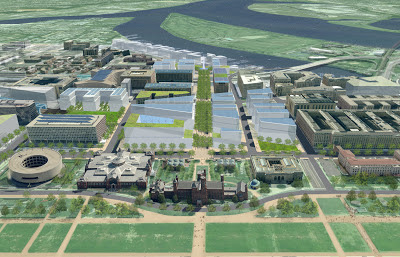 I'm starting to play catch up on news items that occurred while I was away on vacation in SE Asia for the holidays, so this should be a busy posting week on the blog...
Last week, the National Capital Planning Commission (NCPC) approved the final plan of the SW Ecodistrict Initiative, a comprehensive approach to transform a large swath of acreage in and around L'Enfant Plaza from a federal office enclave to a mixed-use, environmentally sustainable neighborhood.  The 15-block study area comprising 110 acres of federal and private land is bounded by Independence Avenue to the north, Maine Avenue to the south, 12th Street to the west, and 4th Street to the east. The plan revolves around four focus areas:

Although the time frame for implementation of the plan (especially the SW Freeway portion) will be decades, a portion of the plan is already in motion. The General Services Administration (GSA), the largest landlord in the study area, has recently released a Request for Information (RFI) to developers to partner with the GSA to redevelop several parcels it owns in Independence Quarter (or Federal Center South as the real estate agency calls it), including the Forrestal Complex, Cotton Annex, the Wilbur and Orville Wright FAA buildings, and GSA's regional office building.  Other short-term actions will include an economic analysis, an implementation program, a stormwater infrastructure study, and an interim 10th Street/Banneker connection.

The full plan is available here and previous posts on the plan can be found here.

Renderings courtesy of NCPC; ZGF Architects
Posted by SWill at 8:57 AM

Ridiculous. A project this size could easily be completed in 5 years or less, not 20. This is government inefficiency at its worst.