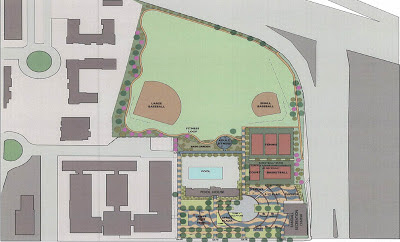 At Monday night's ANC 6D meeting, the commissioners voted unanimously to support a resolution requesting that the Mayor and his administration hold off on taking any substantial action regarding the use of public lands in Southwest (especially land at or adjacent to Randall Recreation Center) until after a Small Area Plan has been completed by the Office of Planning for the neighborhood. The full resolution can be found here. This action was prompted by the possibility that Randall Recreation Center could become a KIPP charter high school. Randall Recreation Center is slated for new playground equipment later this year and more programming is supposed to be done inside the Center, which for years has been woefully underused. There are several public parcels in the quadrant and since development has ramped up in the neighborhood in recent years, interest in Southwest has increased and those public lands become more attractive to developers by the day.

The Office of Planning is supposed to do a Small Area Plan for Southwest sometime in 2013. A Small Area Plan was done in 2011 for the Maryland Avenue corridor as a part of the SW Ecodistrict Initiative, but this Small Area Plan will cover a larger area. Typically, a Small Area Plan provides residents, land owners, developers, city officials and District agencies with a framework and recommendations to guide future development in the study area.

Um, how could renovating that wreck of a rec center take anything away from an adjacent high school? If anything it could be an amenity for them. I was rather pleased to see that it was going to get an update. Sitting on fallow/underused/dilapidated property does nothing to help SW move forward.

@dano - I think the idea was to *replace* Randall Rec with a high school. I'm assuming the reason it is not getting an immediate makeover now is because they want to see what the small area plan shows (which is a good idea). Maybe they can put something even better than a rec center or a school.

I for one would love to see Randall become a beautiful state of the art, fully functional year round recreation center that offers a large variety of activities. Our neighborhood needs something that benefits the residents. It will also help keep the relative quietness/quaintness factor of SW in tact. Definitely not a charter high school though

I would prefer to see more commercial and residential development myself. Hope they move quickly in developing this Small Area Action Plan.

With the new waterfront, possible redevelopment of all of federal SW, Waterfront Station (and the two empty lots) St. Matthew's etc there should be at least ONE place for people who want to stay active to enjoy themselves :)

king-greenleaf is so close, i don't see why we need 2 rec centers. kipp would be a nice option, especially if boundaries change and sw is no longer zoned for wilson.