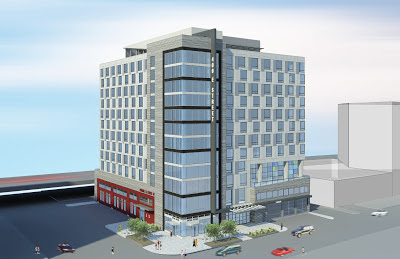 New renderings were released for the 400 E Street firehouse/hotel planned by E Street Development. The above rendering shows a view of the building looking southwest from the corner of 4th and E streets. Despite the change in use from an office building to a hotel, KidPower and DC Central Kitchen will still be located in the building. E Street Development will be at February's ANC 6D meeting to review the curb cuts that are required for the project. It should be a busy meeting in February since there are also supposed to be presentations by JBG for their hotels planned at The Wharf and Forest City for the NW parcel apartment building at Waterfront Station.  Forest City will make their presentation on the NW parcel apartment building at the March 11 ANC meeting. (Note: the firehouse project was the very first topic I wrote about when starting the blog over four years ago so it's nice to see that some forward movement is finally happening with the site).

Renderings courtesy of WDG Architecture
Posted by SWill at 5:28 PM

Again, this is an abuse of community sentiment and support. For shame.

would you like to stay in a hotel that is over a firehouse? Think about it.

what about the fire station on half street that just got the nice new windows? I've seen this 400E St firehouse in the pipeline for sometime now, but I'm confused why we need two fire stations so close. Am I missing something?

The station on M St SW is used for truck/ambulance repairs only.

Ok. I figured that's what it was. There is still a sign on the building further down Half St that says Fire Engine Co. No. 7 in addition to the one that says Repairs. Thanks for clearing that up

I can see how neighbors might be upset over the timing, and might want some input as to whether the project should be re-bid, but I don't see how a hotel is worse than offices. Indeed, I would suspect that more hotel development will help with things like having restaurants stay open into the evening, provide more customers for DC Central Kitchen, and better balances the already office-heavy Southwest Rectangle area.

i am just reading these posts, and would like to clear up some information. SWag, there is a working firehouse, Engine 7 on Half street, as well as the repair shop. The station being built with the hotel at 4th and E, is replacing the station that is at the corner of 6th and E. That station is Engine 13, which contains: Engine 13, Truck 10, Foamunits 1 and 2, TAU-1, and Ambulance 13. Those two stations have been near each other since Engine 13 was built in 1960.