Planning for a Complete Street on M Street 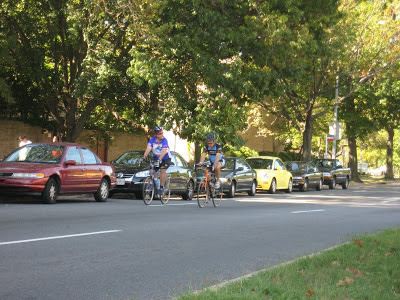 (This post is an abbreviated version of the South by West article that will appear in December's Hill Rag).

Over the past several months, DDOT has been working on a transportation planning study of the M Street, SE/SW corridor.  The study area includes most of ANC 6D, which includes everything south of the Southeast/Southwest Freeway to the Washington Channel and Anacostia River. The study began in early 2012 and after three community meetings and months of study by DDOT and their consultant CH2MHILL, three alternatives were developed for the corridor and surrounding streets. Each of the alternatives are distinct, although some aspects of each alternative are common.

The first alternative would remake M Street as a “Main Street” which would accommodate more transit service. Under this alternative, there would be a median of variable width, including a center turn lane on the Southwest portion of M Street, two travel lanes on each side of the street, and the outer lanes would be an exclusive transit lane for streetcars, Metrobus, and commuter buses. Street parking that currently exists on M Street would be removed under this scenario since the parking lane would be taken up by the transit lane. Right turns would be restricted to certain intersections throughout the corridor so the transit vehicles are able to travel more quickly on the street. In order to compensate for the removal of a traffic lane on M Street, a second travel lane would be added to each side of I Street by removing on-street parking. The bike lane configuration currently on I Street would change to include a mixed travel and bike lane in each direction. In addition, P Street would be widened from one travel lane to two travel lanes between 4th Street and South Capitol Street during peak hours. One-way traffic on some streets would be converted to two-way streets.

Under the second alternative, or the “Balanced Linkages” scenario, M Street would accommodate cars, transit, and bike lanes. The typical cross-section of M Street west of South Capitol Street would have an eight-foot cycle track, an eight-foot parking lane, a 12-foot shared travel lane for general purpose and transit vehicles, and an 11-foot travel/turn lane in each direction.  This scenario reduces the number of travel lanes from three currently to two lanes in each direction on M Street. Streetcar service would be placed along I Street, where the parking lane would be removed and replaced with a shared vehicle/transit lane. The streetcar line would connect to 7th Street on the western side. On-street parking on P Street would be removed as well, replaced with a shared travel/transit lane that would serve the DC Circulator (assuming service is restored to Southwest). No Southwest streets would be converted to two-way streets under the second alternative.

Alternative number three, or the “Mobility Arterial” scenario would make M Street three travel lanes in each direction with the outer lane serving as a shared travel/transit lane. Streetcars would run on this shared lane.  No parking would be provided on M Street under this scenario. However, the middle travel lane would be shared with bicycles. The current configuration of I Street would not change under this scenario. Similar to alternative number two, no Southwest streets would be converted to two-way streets under the third alternative.

The full report can be found here.  Comments will be accepted by DDOT until Friday, November 30 at 5pm. Comments should be emailed to ddot.awi@dc.gov, mailed to Colleen Hawkinson, District Department of Transportation, Suite 500, 55 M Street SE, Washington DC 20003 or faxed to her attention at 202-671-0617.
Posted by SWill at 6:06 PM